Juniper Networks, Inc. (JNPR - Free Report) recently joined forces with NEC Corporation to augment the network capabilities of Herotel, the largest wireless service provider in South Africa, for the likely rollout of IP network based on segment routing principles across the country. The improvement in infrastructure facilities is expected to reduce the complexity of the network, while increasing operational flexibility and efficiency of Herotel.

Notably, Herotel has witnessed significant growth since its inception in 2014 with the acquisition of several small local operators. This, in turn, has led to disparate cost-inefficient infrastructure that required massive, simplified and upgraded network capabilities to effectively manage the operations. In addition, exponential growth in data demand due to increased work-from-home and extended lockdown restrictions has amplified network pressure, making it imperative for Herotel to improve its broadband connectivity.

The simplified network traffic management eradicates the complexity associated with multiple networks and delivers optimal bandwidth utilization with reduced latency. With the latest routing platforms, Juniper aims to significantly improve the network service offering of Herotel. In addition to more agile service delivery, the better network facilities are likely to offer improved security features for enhanced visibility and customer data protection. This, in turn, is expected to provide shorter time-to-market for new services, while ensuring regulatory compliance and data security.

Juniper is set to capitalize on the growing demand for data center virtualization, cloud computing and mobile traffic packet/optical convergence. The company is offering new suites of products, such as the T4000 core router, QFX data center platform, ACX and PTX packet/optical solution, among others. With the growing usage of smartphones and tablets, mobile data traffic has gone up. This has resulted in higher demand for advanced networking architecture, which is leading service providers to spend more on routers and switches. Juniper is expected to benefit from the higher spending pattern among carriers to upgrade their networks for supporting the incremental growth in data traffic.

Despite some short-term challenges, particularly within the cloud and service provider verticals, Juniper expects healthy progress in most areas of its business, which augurs well for its long-term growth. The company has made significant changes to its go-to-market structure to better align its sales strategies with each of its core customer verticals. Moreover, several new products are in the pipeline, which are expected to further strengthen its competitive position across service provider, cloud and enterprise market.

The stock has gained 12.2% over the past year compared with the industry’s rally of 42%. 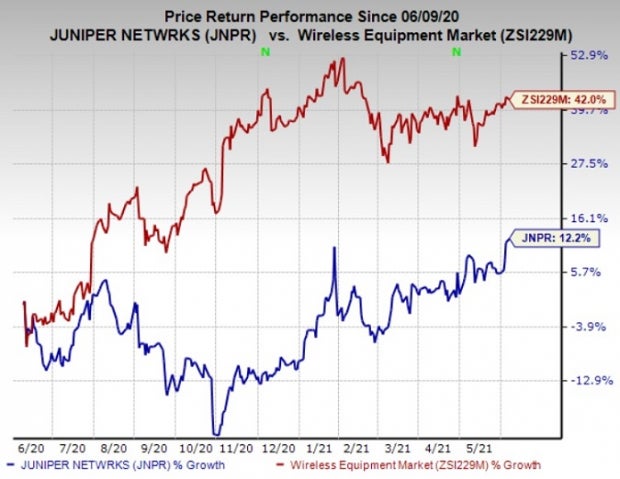 Aviat delivered an earnings surprise of 57.3%, on average, in the trailing four quarters.

Nokia has a long-term earnings growth expectation of 1.5%. It delivered an earnings surprise of 215.2%, on average, in the trailing four quarters.

Tesla (TSLA) Pulls the Plug on Model S Plaid Plus, Plaid on Course