Xcel Energy (XEL - Free Report) announced that it has achieved more than 50% of the carbon neutrality target and is among the few utilities that have pledged to cut emissions from the electricity generation process by 100%.

Xcel Energy plans to achieve carbon neutrality by 2050 through certain initiatives. The most prominent among them is quitting coal usage completely by 2040, and replacing coal-powered production through clean and lower-cost wind projects.

The company will also promote the usage of electric vehicles in its service territories and aims to provide power to 1.5 million electric vehicles by 2030. This will not only aid in lowering emissions but also allow customers to save nearly $1 billion annually in fuel costs by 2030, while cutting 5 million tons of carbon every year from the transportation sector.

The company will invest in the natural gas business and introduce new techniques to cut down methane emission.

A clear transition is evident in the U.S. utility space, with an increasing number of electricity companies deciding to provide 100% carbon free electricity to customers. Increase of natural gas and clean alternate source of energy is helping the utilities to lower emissions. The ongoing research and development work, usage of new technology and battery storage projects are making utility scale renewable projects viable.

Another utility Dominion Energy (D - Free Report) is constantly adding clean energy sources to the production portfolio. The company is in the process of adding 3,000 MW of solar or wind generation in the state of Virginia by 2022. Its long-term objective is to add 24 GW of battery storage, solar, hydro and wind (offshore as well as onshore) projects by 2036 as well as increase renewable energy capacity by more than 15% per year, on average, over the next 15 years.

Utilities like Avista Corporation (AVA - Free Report) and DTE Energy (DTE - Free Report) have announced plans to go carbon neutral by 2045 and 2050, respectively, and have taken initiatives to lower emissions.

In the past three months, shares of this utility have gained 12.8%, underperforming the industry’s 6.9% growth. 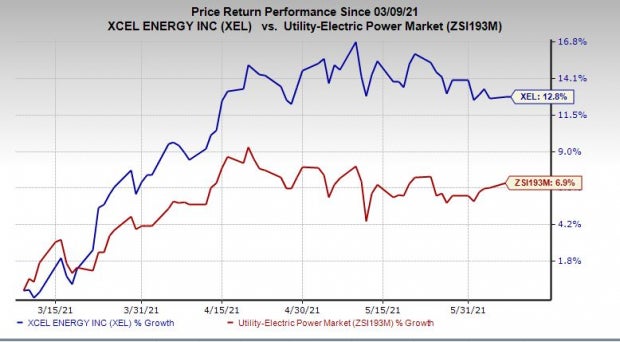