Last week, various auto giants unveiled May 2021 sales reports. Sales numbers were strong, thanks to the rising demand for vehicles amid preference for personal mobility, widespread vaccination drive, massive federal aid and the reopening of activities. Quite a few auto biggies that still report sales on a monthly basis enjoyed double-digit year-over-year sales growth for May. Japan-based auto giants Toyota and Honda’s U.S. vehicle sales jumped more than 40% year over year. Hyundai posted a monthly sales record for the third straight month, with sales shooting up around 56%. Ford’s vehicle sales moved up 4.1% year over year.

Meanwhile, EV behemoth Tesla (TSLA - Free Report) made headlines for the wrong reasons. Reportedly, company’s vehicle orders in China dropped by almost half in May. Meanwhile, Tesla issued three separate recalls in the United States this week over production issues that can cause potential safety problems. Two of the recalls are over possible seat belt issues, affecting roughly 7,696 vehicles in the United States, while the third recall is over faulty brake bolts.

BorgWarner (BWA - Free Report) announced the completion of the tender offer for shares of AKASOL AG, making the company the owner of 89.08% of AKASOL’s outstanding shares. BorgWarner has paid roughly 648 million euros to settle the arrangement, with the purchase price being 120 euro per tendered AKASOL share. The acquisition enhanced BorgWarner’s commercial vehicle and industrial electrification portfolio, enabling the company to capitalize on the evolving battery pack market. (BorgWarner Boosts Electrification Portfolio on AKASOL Takeover)

General Motors (GM - Free Report) announced plans of ramping up production and deliveries despite the global chip crunch. Thanks to ‘production line efficiencies’, General Motors intends to ramp up production of Chevrolet Silverado HD and GMC Sierra HD full-size pickups by 1,000 units a month, effective mid-July. The company has already revved up shipments of Chevrolet Colorado and GMC Canyon mid-size trucks by around 30,000 units in May, which is set to continue through the first week of July. This Zacks Rank #1 (Strong Buy) firm now expects 1H21 results to be significantly better than the previous forecast, thereby encouraging investors. You can see the complete list of today’s Zacks #1 Rank stocks here.

Standard Motor Products (SMP - Free Report) announced the acquisition of 100% capital stock of Trumpet Holdings, commonly referred as Trombetta. The transaction is worth $108 million and is subject to certain adjustments after completion. Standard Motor will fund the buyout through cash borrowings under its revolving credit facility. It is projected that the deal will boost the company’s earnings in 2021. The acquisition fits perfectly with the company’s strategy and vision to enhance product offerings beyond the core aftermarket business into other related markets. (Standard Motor Buys Trombetta, Enhances Product Offering)

Renault SA (RNLSY - Free Report) and Plug Power launched a joint venture (JV) for developing hydrogen-powered light commercial vehicles (LCV). The JV is named HYVIA, an abbreviation of ‘HY’ for hydrogen and the Latin word “VIA” for road, reflecting the companies’ vision to provide green mobility solutions. HYVIA will lead the path toward decarbonation in Europe with an extensive hydrogen-enabled product line-up. Moreover, HYVIA, which targets a 30% market share in hydrogen-powered LCV in Europe by 2030, will capitalize on the existing expertise of Renault and Plug Power to enhance its foothold. (Renault & Power Plug Form Hydrogen Mobility JV in Europe) 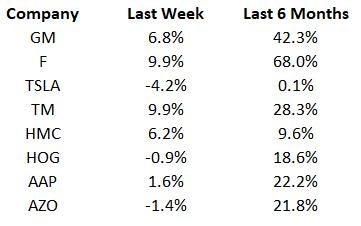 In the past six months, all stocks have increased, with Ford being the maximum gainer. Over the past week, share price movement has been mixed, with Ford and Toyota registering maximum gains while Tesla losing the most.

Industry watchers will track China vehicle sales data for May 2021, which is likely to be released by China Association of Automobile Manufacturers this week. Also, watch out for updates on how automakers will tackle the semiconductor shortage and make resultant changes in business operations.