Moderna, Inc. (MRNA - Free Report) announced that it has submitted regulatory applications seeking conditional marketing approval or authorization in Europe and Canada for the use of its COVID-19 vaccine, mRNA-1273, in adolescents (aged 12 to less than 18).

The applications were filed based on promising data from the phase II/III study — TeenCOVE — that evaluated mRNA-1273 in adolescents in the United States. The company will file a similar regulatory application for the adolescents to the FDA soon.

Additionally, data from the TeenCOVE study also demonstrated a vaccine efficacy of 93% in seronegative adolescent COVID-19 patients who received one dose of the vaccine.

We remind investors that, the company has initiated rolling submission for a biologics license application (BLA) with the FDA seeking approval/licensure for use of mRNA-1273 in adults earlier this month. A potential approval to the BLA for mRNA-1273 will allow Moderna to continue to commercialize the COVID-19 vaccine even after the emergency situation recedes with lowering of infection rates

Moderna’s stock has gained 110.1% in the year so far against the industry's decline of 4%. 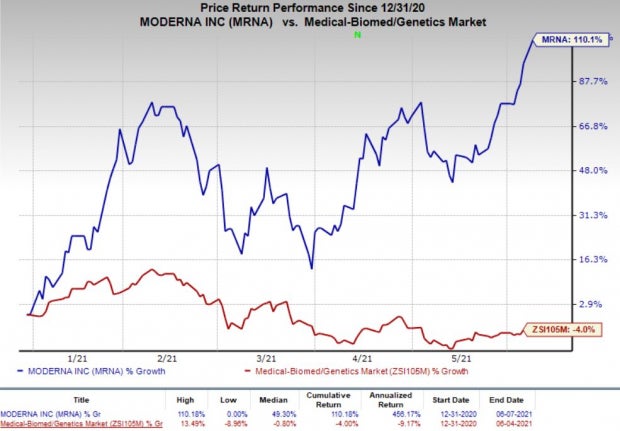 Pfizer’s lead in getting adolescent label for the vaccine is likely to hurt potential sales of Moderna’s vaccine.

Please note that Moderna and Pfizer are both developing their COVID-19 vaccine in additional population groups, such as children from 6 months to less than 12 years of age. The companies are also evaluating the administration of a single booster dose mainly with the aim of protecting against the emerging variants of concern.

In a separate press release, the company announced an agreement with global pharma company, Medison Pharma, to commercialize the mRNA-1273 across Central Eastern Europe and Israel.