In another encouraging development, Brazilian carrier Gol Linhas’ (GOL - Free Report) May traffic surged 65% from its April reading as the increased rate of vaccinations prompts people to opt for more air travel.

1.At the Bernstein Strategic Decisions Conference, Delta, currently carrying a Zacks Rank #3 (Hold), predicted second-quarter revenues (on an adjusted basis) in the $6-6.2 billion range, indicating a 50-52% decline from the second-quarter 2019 actuals. However, this suggests an improvement from the past guidance issued in April, which had projected a 50-55% decline. Owing to the uptick in air-travel demand, load factor (% of seats filled by passengers) and yields are also showing signs of recovery throughout the June quarter.

Adding to this optimism, Delta anticipates domestic leisure travel in the current month to be more than 100% restored from the 2019 actuals. Pre-tax loss for the second quarter is now expected in the $1-$1.2 billion range, which again betters the previous estimate of $1-$1.5 billion.

2.In an SEC filing dated Jun 3, management at American Airlines stated that its domestic load factor in May was around 84% and greater than 88% over the Memorial Day holiday. The airline expects the “strength in bookings to continue through the end of the second quarter and into the third quarter”, provided current demand trends sustain. Moreover, it anticipates “leisure yields to approach or exceed the corresponding 2019 levels during the peak summer travel period.” On a further positive note, American Airlines is seeing a gradual increase in demand among small- and medium-sized enterprises, and some large corporate customers, although business travel demand continues to be suppressed.

3. At Gol Linhas, traffic soared 519% year over year in May. In the same time frame, capacity expanded 425%. Since traffic surge was more than capacity expansion, load factor increased 13.3 pp to 88% from the year-ago period’s levels. Gol Linhas’ total monthly departures skyrocketed 401% while seats jumped 457.3%. Gol Linhas transported 1.1 million passengers in May 2021, up 547% from the May 2020 tally.

4.With higher frequency in vaccination across the European Union and the resultant improvement in air-travel demand, Ryanair Holdings’ (RYAAY - Free Report) May traffic surged to 1.8 million guests from a mere 0.07 million in the year-ago period. On a rolling-annual basis, total traffic dived 75% to 30.2 million guests. The airline operated more than 12,000 flights in May.

5.In a bid to add supersonic jets to its fleet, United Airlines inked an agreement with Denver-based aerospace company Boom Supersonic. With this, it becomes the first U.S.-based airline to ink a deal with Boom Supersonic. Under this pact, the carrier will buy Boom's 15 'Overture' aircraft, provided the fleet meets its safety, operating and sustainability requirements. The airline also has an option to purchase additional 35 supersonic jets. 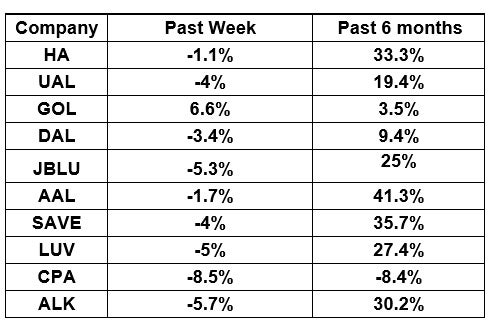 Stay tuned for May traffic reports from the likes of Allegiant Travel Company (ALGT - Free Report) .