The company, currently carrying a Zacks Rank #2 (Buy), has a market cap of around $43.2 billion and an expected long-term earnings per share growth rate of around 18.4%. 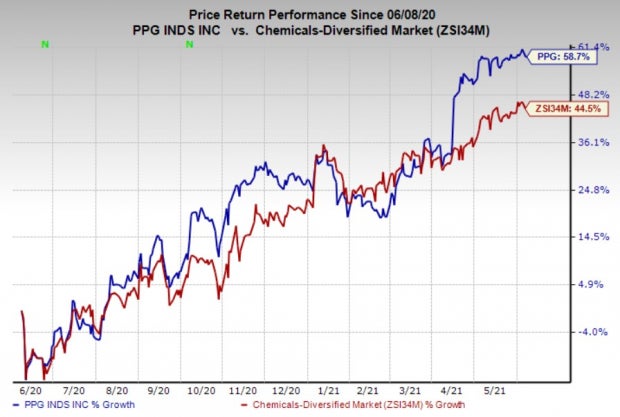 An impressive first-quarter performance and upbeat prospects stemming from strong demand recovery, restructuring strategies and strategic acquisitions have contributed to an uptick in the company shares. PPG Industries’ adjusted earnings of $1.88 per share rose from the year-ago figure of $1.31, topping the Zacks Consensus Estimate of $1.58. Net sales rose roughly 15% year over year to $3,881 million, surpassing the Zacks Consensus Estimate of $3,691.6 million.

Earnings estimates for PPG Industries have also been moving up over the past two months. The Zacks Consensus Estimate for earnings for 2021 has increased around 7.2%, while the same for second-quarter 2021 has moved up roughly 4.4%. The favorable estimate revisions instill investor’s confidence in the stock.

In the first quarter, sales volumes were up around 7% year over year on the back of continued global economic recovery. A rise in the demand for automotive and general industrial coatings, a favorable foreign currency transition, acquisitions and an increase in selling prices backed its growth momentum. The company also saw higher volumes in every segment on a year-over-year basis, driven by improved demand.

The company in its first-quarter call stated that it anticipates overall global coatings demand to continue to be broad-based in many of the end-use markets served with the gradual recovery of the aftermarket aerospace coatings demand from the pandemic-led stupor in the second half, backed by higher domestic flight activity worldwide. It also expects adjusted earnings per share for 2021 of between $2.15 and $2.2.

Expansion through acquisitions also has been beneficial to the company. This has been adding to its scale of operations and portfolio as well as leading to value creation for its customers. The recent acquisitions of Ennis-Flint in December 2020, Versaflex in first-quarter 2021, Worwag in May 2021 and Tikkurila — to be closed in the second quarter — are anticipated to deliver synergies in the range of $25-$30 million for 2021.

Also, it is benefiting from a diversified business in terms of product offerings and regions, in turn enabling the company to deliver growth to shareholders by harnessing opportunities in fast-growing regions. Additionally, the company aims to boost shareholder returns. In 2020, the company returned around $500 million to shareholders through dividends. It also paid out dividends worth $130 million in the last reported quarter. PPG Industries had roughly $1.5 billion remaining under its current share repurchase authorization at the end of 2020.

Orion has a projected earnings growth rate of 61.5% for the current year. The company’s shares have surged 60.9% over a year.

Tronox has a projected earnings growth rate of 242.9% for the current year. The company’s shares have appreciated 181.8% over a year.

Univar has a projected earnings growth rate of 35.2% for the current year. The company’s shares have jumped 55.8% over a year.

Why You Should Add Veeva Systems (VEEV) to Your Portfolio