Shares of G-III Apparel Group, Ltd. (GIII - Free Report) jumped 10.7% during the trading hours on Jun 7 following sturdy first-quarter fiscal 2022 earnings and an encouraging outlook for the current fiscal year. Both the top and the bottom line beat the Zacks Consensus Estimate and also improved year over year. Notably, the quarter marked fourth straight earnings beat for the company.

In the fiscal first quarter, sales of the product through e-commerce were praiseworthy. Moreover, the company’s own sites for DKNY and Karl Lagerfeld Paris combined comparable sales rose nearly 40% year over year.

Management said that sales for the broader lifestyle apparel including sportswear, wear-to-work attire and dresses have been advancing for a while now. Besides, the company’s overall business in North America is impressive. The company remains upbeat about its portfolio of globally recognized lifestyle brands, such as DKNY, Donna Karan, Calvin Klein, Tommy Hilfiger and Karl Lagerfeld. 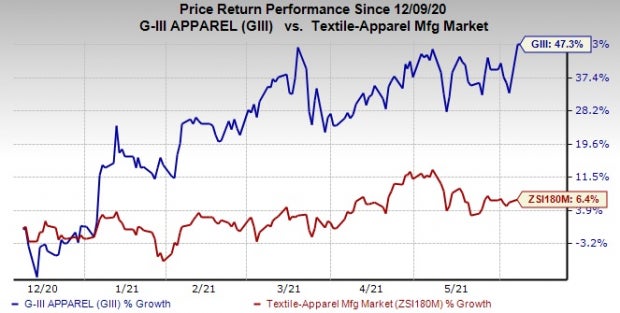 Over the past six months, shares of this presently Zacks Rank #2 (Buy) company have increased 47.3%, outperforming the industry’s 6.4% growth.

We note that the prior-year quarter’s results included losses from Wilsons and Bass store operations of 31 cents per share. But with G-III Apparel successfully completing the restructuring of its retail segment, it could permanently get rid of the underperforming Wilsons Leather and G.H. Bass stores.

Net sales improved 28.3% year over year to $519.9 million and also surpassed the Zacks Consensus Estimate of $461 million after reporting a miss in the preceding quarter. The top-line outperformance can be attributed to sales growth at the Wholesale unit, offset by soft sales at the Retail division.

The company’s business in China saw another quarter of significant growth with momentum in e-commerce. However, the DKNY European business continued facing widespread COVID shutdowns.

A Sneak Peek Into Margins

SG&A expenses declined nearly 8% year over year to $141.6 million on cost-containment efforts undertaken amid the pandemic. Also, the reduction in store base was offset by higher expenses related to greater sales and profitability.

Further, the company reported an operating income of $46.8 million against the operating loss of $43.3 million recorded in the year-ago quarter.

Net sales at the Wholesale segment were $512 million, up roughly 35% year over year. Also, the segment’s gross margin rose 670 bps to 36.3% from the year-ago quarter, driven by clean inventories at retail that resulted in lower promotional activity.

Net sales at the Retail segment totaled $19 million, down nearly 43% from the prior-year quarter’s reported figure. We note that the prior-year results included net sales of $19.3 million from Wilsons Leather and G.H. Bass store operations. Nonetheless, the segment’s gross margin improved to 50.3% from 35.9% in the year-ago quarter, mainly owing to gains from cost-control efforts.

G-III Apparel ended the fiscal first quarter with cash and cash equivalents of $396.3 million and a long-term debt of $514.9 million. Total stockholders’ equity was $1,357.9 million. Further, inventories declined nearly 31% to $346.7 million at the end of the reported quarter. At the quarter-end, it had available cash under its credit agreement of about $860 million.

For second-quarter fiscal 2022, G-III Apparel forecasts net sales of about $460 million, indicating growth from $297 million delivered in the same quarter a year ago. Further, earnings per share are likely to come in the bracket of 3-13 cents versus a net loss of 31 cents seen in the year-earlier quarter.

However, this view indicates a decline of roughly 12% from fiscal 2019 sales excluding $252 million sales from the Wilsons and Bass store operations. Notably, management did not expect new store closures or the effect of tighter government restrictions. Further, the China business is anticipated to be up 50% for the fiscal year.

Markedly, the Zacks Consensus Estimate for earnings is currently pegged at 6 cents for the second quarter and $2.34 for fiscal 2022.

Rocky Brands (RCKY - Free Report) has a trailing four-quarter earnings surprise of 157%, on average, and a Zacks Rank #1 (Strong Buy), currently. You can see the complete list of today’s Zacks #1 Rank stocks here.

Under Armour (UAA - Free Report) has a long-term earnings growth rate of 32.2% and a Zacks Rank #2 at present.

Kroger (KR) to Employ 10,000 Associates in a Hybrid Hiring Event