Per the terms, Electric Boat will provide repair, engineered overhaul and other services, necessary to prepare for and accomplish maintenance and modernization work for the submarine. Work related to the deal will be performed in Groton, CT, and is scheduled to be completed by February 2022.

The global demand for submarines has been witnessing a rising trend in recent times. This has primarily been driven by the need for undersea capability enhancement and fleet expansion initiatives undertaken by emerging economies including India and China. Nevertheless, North America still leads the global submarine market’s growth.

SSN, which is a nuclear-powered attack submarine, is expected to be the largest segment in the global submarine market, driven by several high-value procurement programs worldwide, including the U.S. Navy’s Virginia-class procurement.

With the number of foreign diesel-electric/air-independent propulsion submarines increasing, the United States Submarine Force relies on its technological superiority and the speed, endurance, mobility, stealth and payload offered by nuclear power to retain its predominance in the undersea battlespace.

Being one of the only two contractors in the world equipped to build nuclear-powered submarines, General Dynamics enjoys a dominant position as a Navy contractor in the United States. Notably, such aforementioned developments along with the latest contract win should bode well for the company’s prospects.

Per a report released by the U.S. Department of Defense, the fiscal 2022 defense budget includes a spending provision of $34.6 billion on combat-effective naval forces, higher than fiscal 2021’s allotted budget of $32.3 billion. The allotted budget specifically includes the requirement of one Columbia-class ballistic missile submarine and two Virginia Class Submarines, designed by Electric Boat and Huntington Ingalls Industries (HII - Free Report) . Such favorable budgetary projections bode well for major shipbuilders like General Dynamics, as it increases the company’s possibility of winning more shipbuilding and associated contracts.

Further, looking ahead, the global naval shipbuilding market is expected to grow by $14.36 billion during the 2020-2024 period, at a CAGR of 3%, as estimated by a Technavio report. Notably, other players in the same industry, such as Bae Systems PLC (BAESY - Free Report) , Mitsubishi Heavy Industries, Ltd. (MHVYF - Free Report) , alongside General Dynamics and Huntington Ingalls, should potentially benefit from the projected growth of the naval shipbuilding market.

Shares of General Dynamics have gained 17.3% in a year compared with the industry’s growth of 6.8%. 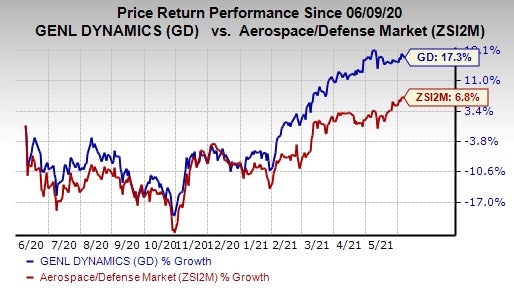 Kroger (KR) to Employ 10,000 Associates in a Hybrid Hiring Event