This year, ExxonMobil intends to drill three wells in the Canje Block, wherein it plans to replicate the success from the Stabroek Block. The company has made multiple world-class oil discoveries at the Stabroek Block, located off the coast of Guyana. It estimates gross recoverable resource of 9 billion oil-equivalent barrels from the block. Moreover, the integrated energy major projects daily oil production volumes of more than 800,000 gross barrels by 2025.

Bulletwood-1 well, the first one drilled in the Canje Block, did not find any commercial oil quantities. Jabillo-1 well, the second one, commenced earlier this year but had to be paused. Following some maintenance work, the company recommenced drilling at the site. Notably, Jabillo-1 is expected to have 1 billion barrels of oil. The reservoir is expected to have hydrocarbons from the Late Cretaceous age.

ExxonMobil is the operator of the block with a 35% stake. It has TotalEnergies SE , JHI, and Mid-Atlantic Oil & Gas as partners, having 35%, 17.5% and 12.5% interests, respectively. Westmount Energy, which has an indirect stake in JHI, noted the Maritime Administration Department of Guyana’s announcement of restarting operations at the Jabillo-1 well.

The third well in the Canje Block, namely Sapote-1, is expected to be drilled later this year. ExxonMobil is expected to utilize the Stena DrillMax rig for this well, which is to be located in the eastern portion of the block.

The stock has gained 22.6% in the past year compared with 14.9% rise of the industry it belongs to. 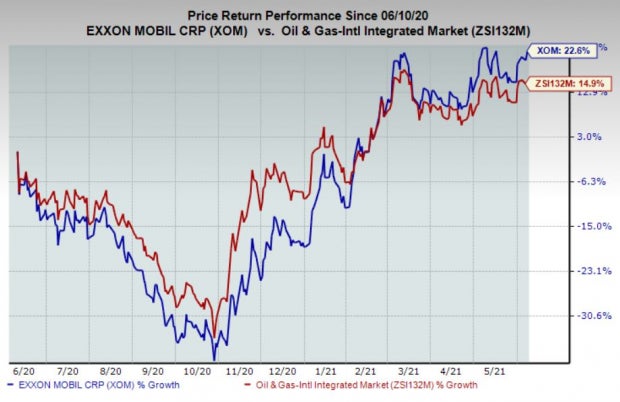