The COVID-19 pandemic has provided a major boost to the music streaming industry that gained both in terms of revenues and subscribers due to the lack of live concerts, limited capacity at sporting events and movie theaters, which led consumers to tune into music-streaming apps.

According to the report from RIAA, the music streaming industry saw more than 15 million new users buying subscriptions, reaching a total of 75.5 million paid subscribers across the United States in 2020 while total revenues from recorded music increased 9.2% on a year-over-year basis to $12.2 billion.

There has been a significant increase in the number of subscribers on various platforms such as Spotify (SPOT - Free Report) , Apple Music (AAPL - Free Report) , Sirius XM, Alphabet’s (GOOGL - Free Report) Google owned YouTube and Amazon’s (AMZN - Free Report) Amazon Music services, which face intensifying competition from peers like Tencent Music Entertainment, Tidal, Deezer and iHeart Radio. This is expected to continue through 2021. 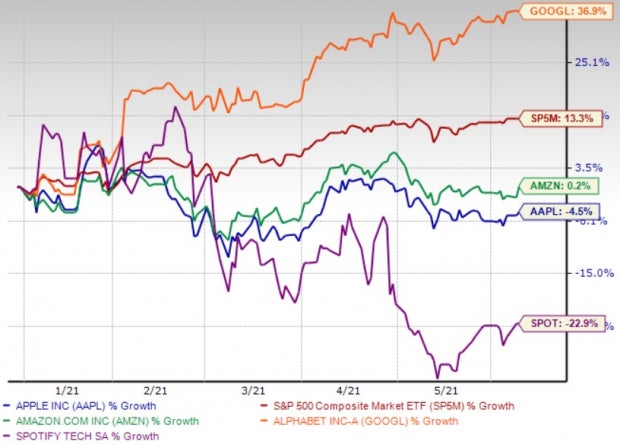 While CDs, vinyl and cassettes have found themselves a small but passionate audience, the way most people listen to music today is through a streaming service.

Rise in penetration of smartphones, digital platforms, surge in fan base of popular artists, and aggressive investment by record companies have triggered growth of music streaming services despite data privacy, security of databases and copyright infringement issues.

Additionally, rising proliferation of smart speakers and wearables that enable synchronization with music streaming apps adds to demand for such apps.

According to a Research and Markets report, the global music streaming market is poised to grow by $7.47 billion during 2021-2025 at a CAGR of 19%.

Moreover, increase in mobile ad spending and the number of subscription services is anticipated to boost the growth of the music streaming market as well.

Further, introduction of 5G, AI, ML and rise in population of Internet users in developing countries create new opportunities in the long haul.

Apple will be offering two new features to its Apple Music subscribers, lossless audio and Dolby Atmos tracks. Both features will be available starting in June at no additional cost.

Moreover, this Zacks Rank #2 (Buy) company is rumored to add a high-fidelity (HiFi) audio streaming tier to Apple Music in the coming weeks along with Apple Airpods 3. You can see the complete list of today’s Zacks #1 Rank (Strong Buy) stocks here.

Spotify is benefiting from premium subscriber growth. Its focus on the personalization of playlists enhances the music experience for users.

Spotify Connect – the service’s protocol for connecting to third-party devices – makes it even more accessible, allowing it to connect to various products, from wireless speakers to gaming consoles and more.

In February, Spotify announced that Spotify HiFi, which also will offer high-quality, lossless audio, will be launched later this year.

Recently, Amazon announced that Amazon Music HD, the high-quality streaming tier it launched in 2019, will be available to all eligible Amazon Music Unlimited subscribers at no additional cost for $9.99 per month. It was previously available for an extra $5 per month.

Amazon Music’s HD catalog has grown to more than 70 million songs and there are over 7 million Ultra HD tracks available. Amazon Music HD customers can also access a growing catalog of songs remixed in 3D Audio formats such as Dolby Atmos and Sony 360RA, which can be played back on Amazon’s own high-fidelity speaker, the Echo Studio.

Top, popular and new podcasts are streaming on Amazon Music. Further, many original podcasts hosted by Will Smith, Dan Patrick, DJ Khaled and Becky G are available. These podcasts can also be accessed from Amazon Echo smart speaker in addition to the Amazon Music app.

Apart from podcasts, Amazon, which currently carries a Zacks Rank #3, took a ground-breaking step in the streaming world by integrating Amazon Music with Twitch’s live-streaming feature. The move offers various options to users to explore live streaming of their favorite artists on the Amazon Music app.

Alphabet’s division Google is making every effort to bolster presence in the music streaming market on the back of updating features on YouTube Music. YouTube continues to boast more than 2 billion monthly logged-in users, who watch more than 1 billion hours of video daily.

At the end of first-quarter 2021, Youtube achieved advertising revenues of $6 billion, up 49% year over year.

Moreover, growing popularity of YouTube Shorts — a TikTok-like short-form video feature — is a major positive for this Zacks Rank #2 company. Markedly, Youtube Shorts had 6.5 billion daily views in March, up from 3.5 billion at the end of 2020.

Moreover, Square (SQ - Free Report) is making a foray into the booming music-streaming space through a definitive agreement to acquire a majority stake in Jay-Z’s music-streaming service called Tidal. The deal is expected to be completed in second-quarter 2021.

Choose These 5 Low Leverage Stocks to Keep Your Portfolio Safe