Shares of the company declined 3.4% in the pre-market trading session, owing to the dismal earnings performance.

Earnings per share of 25 cents declined 6% year over year and missed the Zacks Consensus Estimate of 30 cents. Lower-than-expected earnings can be attributed to higher costs and margins, which offset top-line growth. In fiscal 2021, earnings per share improved 9% year over year to $1.88, including a gain of 20 cents on the sale of Early Times, Canadian Mist and Collingwood brands.

Net sales of $812 million beat the Zacks Consensus Estimate of $788.8 million and improved 14% year over year on a reported basis. On an underlying basis, net sales were up 19% from the prior-year quarter. In fiscal 2021, reported sales were up 3%, while underlying sales improved 6%. The top line benefited from strong volume growth, offset by a decline in price/mix.

The company reported volume growth of 12% in fiscal 2021, aided by new flavors introduced for Ready-to-Drink (RTDs) and Jack Daniel’s. Price/mix dropped 6% due to unfavorable portfolio mix shift toward lower-priced brands (like New Mix and Jack Daniel’s RTDs) and the unfavorable channel mix due to the pandemic-led restrictions on the on-premise channel across several developed markets globally.

Moreover, the company remains optimistic about the fiscal 2022 top and bottom lines as the operating environment continues to improve. It expects to benefit from the strength of its markets and the reopening of the on-premise channel and pick-up in tourism. Also, it anticipates capitalizing on the ongoing spirit premiumization trend. Consequently, it anticipates underlying sales and operating income growth in mid-single-digits for fiscal 2022.

Overall, the Zacks Rank #3 (Hold) company’s shares have gained 10.6% in the past three months compared with the industry’s rally of 18.1%. 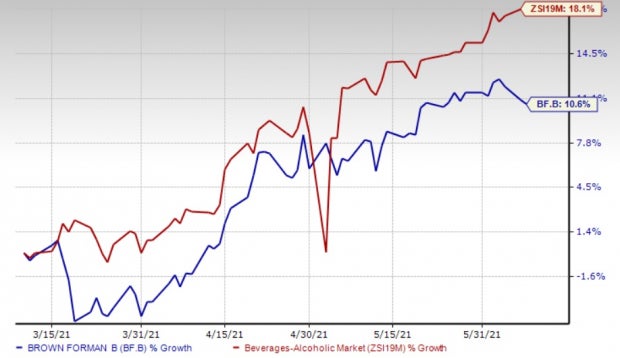 In fiscal 2021, underlying sales growth was driven by gains across each of the three major International Monetary Fund geographic clusters (the United States, developed international and emerging markets), partly offset by declines in Travel Retail and used barrels. On a geographic basis, underlying sales improved 10% each in the United States and the developed international markets, while it registered growth of 6% in the emerging markets.

Growth in the United States, the company’s largest market, was driven by strong demand for premium bourbons and Jack Daniel’s RTDs. Additionally, the company benefited from higher volume and prices for tequilas, Herradura and el Jimador. Meanwhile, gains in the developed international markets were led by strong growth in Australia, Germany, France, and the U.K. This was partly negated by declines in the on-premise focused markets as well as those dependent on tourism, including Spain and Czechia.

Underlying sales in the emerging markets were propelled by volume Brazil, Mexico, China and Poland. However, reduced tourism and trading down to lower-priced brands in some markets offset sales growth. Further, the company’s Travel Retail business continued to be impacted by the pandemic-led travel bans and restrictions.

In fourth-quarter fiscal 2021, Brown-Forman’s gross profit increased 10% year over year on a reported basis and 17% on an underlying basis to $498 million. Meanwhile, the reported gross margin contracted 260 basis points (bps) to 61.3%. In fiscal 2021, gross profit declined 2% on a reported basis and rose 3% on an underlying basis. The reported gross margin for the fiscal declined 270 bps to 60.5%.

The company declared a quarterly cash dividend of 17.95 cents per share on Class A and Class B shares. The dividend is payable Jun 1, 2021, to shareholders of record as of Jun 8.