For investors’ note, Theranova is currently used in various countries, including the United States. Notably, it was granted a De Novo application by the FDA, which established a new classification of dialyzer technology with unique performance standards. Interestingly, such designations are rarely granted in the dialysis space.

With the latest positive study results, Baxter’s Renal Care business is expected to gain a solid foothold in the global arena.

Significance of the Data

Theranova was developed to provide HDx therapy so as to filter a wider array of molecules from the blood unlike traditional hemodialysis filters. This effective removal of conventional and large middle molecules allows for filtration almost similar to that of the kidney. Notably, these large middle molecules are feared to be associated with inflammation and cardiovascular disease in patients with kidney failure.

Per management, the new findings associated with Theranova-enabled HDx therapy largely support the evidence that patients with kidney disease who are on the therapy may see improved clinical outcomes and lower healthcare resource utilization.

Per a report by Research and Markets, the global hemodialysis market was valued at $78.30 billion in 2019 and is estimated to reach $116.66 billion by 2030 at a CAGR of 3.6%. Factors like rising incidences of renal issues, growing occurrence of diabetes and hypertension, and shortage of kidney donors are likely to drive the market.

Given the market potential, the latest favorable data is expected to provide a significant boost to Baxter’s business globally.

Of late, Baxter has witnessed a few notable developments across its renal care business.

The company, this month, announced the launch of the Sharesource Analytics 1.0 premium module, the next generation of digital health for home-based peritoneal dialysis (“PD”) patients.

In May, Baxter announced the global launch of the latest version of its next-generation platform, PrisMax 2. The PrisMax 2 system aims to help streamline the delivery of continuous renal replacement therapy and other organ-support therapies while allowing hospitals the flexibility to meet ICU requirements. 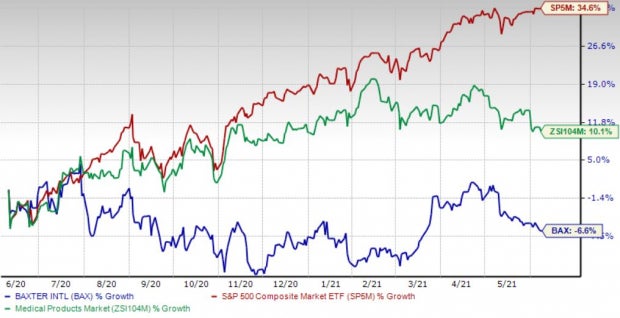 Download FREE: How to Profit from Trillions on Spending for Infrastructure>>