After demonstrating its operational resiliency with the sale of Telxius’ towers in Europe and Latin America, followed by the mega merger with Virgin Media, Telefonica, S.A. (TEF - Free Report) is set to solidify its foothold in the booming IoT market. The Spanish telco’s global Corporate Venture Capital vehicle, Telefonica Tech Ventures, recently invested in Israel-based startup — Monogoto — to augment the latter’s private IoT networks business on the back of higher product sales and market penetration.

At the same time, the involvement of Telefonica Tech Ventures in this seed funding round will enable it to secure its place in Monogoto’s Advisory Board with a privileged access to its avant-garde technology. The investment will also provide a robust test environment to Telefonica that will reinforce its presence in 5G-backed virtual private networks while ensuring higher chances of tapping future commercial agreements in thriving markets, thereby accelerating digital transformation.

Markedly, Monogoto is a telco startup that specializes in cellular connectivity, IoT and Machine-to-Machine communication, to name a few. Its over-the-top network is API (Application programming interface)-enabled that allows developers and enterprises to build, manage, secure and scale IoT applications. With exposure in more than 180 countries, the firm operates under a cloud-based Infrastructure-as-a-Service model that effectively controls the global network of devices.

Meanwhile, Telefonica Tech Ventures creates new businesses and builds strategic partners by primarily investing in IoT/Big Data, blockchain and cyber security startups. As a result, the combined synergies generated from these two entities are likely to bring about a drastic change in the evolving connectivity landscape, given the higher deployment of private LTE/5G networks and cloud-based cellular IoT connectivity.

Although the sum invested by Telefonica has not been disclosed, the deal will bolster product and business model innovation. It will also foster Monogoto’s portfolio of APIs and 5G applications with a simplified end-user experience. Apparently, with adequate backing from other venture capital companies as well, the Israel-based company has managed to raise a total of $11 million, thereby infusing a sense of confidence among investors.

Most importantly, the alliance will aid Telefonica to fortify its cloud native value proposal for private networks within healthcare, industrial and utilities sectors, thereby emphasizing on new use cases. Further, the move is expected to not only cement Monogoto’s 5G networking digital infrastructure but also facilitate Telefonica’s venture capital arm to tackle the major headwinds in the telecom industry backed by its enhanced investment strategies.

Telefonica currently has a Zacks Rank #3 (Hold). Shares of the company have gained 12.6% compared with the industry’s growth of 6.5% in the past six months. 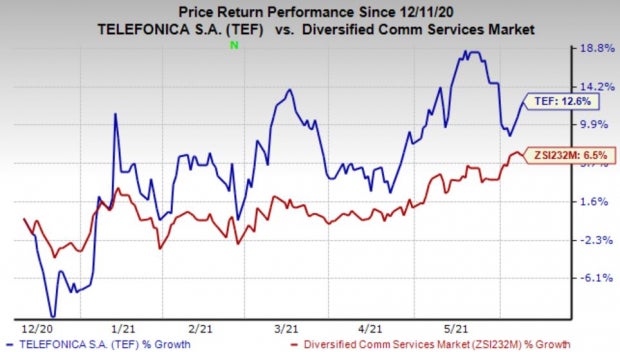 Vivendi has a long-term earnings growth expectation of 15.6%.

BCE has a long-term earnings growth expectation of 4.7%.

UGI delivered a trailing four-quarter earnings surprise of 58.2%, on average.