After a brief initial slump, the U.S. telecom stocks witnessed a steady uptrend for the most part of the past five trading days, largely buoyed by the federal and administrative steps to set up guardrails and legislation to safeguard domestic interests. With an overwhelming majority, the Senate approved a bipartisan legislation for $190 billion funds for R&D and strengthening regional economic development, manufacturing and supply chain, while separately authorizing additional $52 billion for boosting production of semiconductor chips & telecommunications equipment over the next five years. The federal funding is widely expected to unlock private capital and benefit the overall sector, which possibly triggered the accretion over the past week.

The bill, dubbed the "U.S. Innovation and Competition Act" seeks to bring chip manufacturing back in the country. Various experts opine that this, in turn, could set the ball rolling for creating of about seven to 10 new chip manufacturing units with investments from states and private sector firms. In addition, President Biden amended an executive order by his predecessor and banned U.S. investments in 59 firms with alleged ties to China’s military or in the surveillance industry. This included telecom firms like Huawei, China Telecom Corporation and China Unicom. Although the core elements of the previous order was kept unchanged, the amended order aimed to take a more targeted approach to include additional companies within the purview of the list in the near future that are deemed to be detrimental to the domestic security interests.

The President also revoked a Trump-era executive order that sought to ban China-based apps TikTok and WeChat, replacing it with a new order that aimed to conduct a thorough review process of the underlying security risks. The move was primarily intended to build a watertight case for banning any app that threatened national security interests and withstand any legal challenge in the federal court. Although it is still unclear whether this would adversely impact the operations of such apps in the country, the directive aims to undertake an orderly coherent process to identify and execute corrective actions against the spread of espionage technology. Meanwhile, the White House unveiled the findings of the 100-day review process of the supply chain bottlenecks that the President had initiated in February. The administration is planning to hit China with a “supply chain trade strike force” for specific violations in the supply chain mechanism that largely contributed to the demand-supply imbalance and devise ways to shore up its competitiveness against such adversities.

Leveraging Nokia’s AirScale Baseband and mmWave Radios in the 28 GHz band, the trial was conducted on US Cellular’s commercial network in Grand Island, NE, utilizing Qualcomm Snapdragon X55 5G Modem-RF System and Qualcomm QTM527 mmWave antenna module. The tests were undertaken in multiple locations to gauge the efficacy under different scenarios, measuring distance, throughput and latency in each instance to get a comprehensive picture.

2.     AT&T Inc. (T - Free Report) and Cisco Systems, Inc. have joined forces in order to better adapt to the evolving communication requirements of the hybrid workforce and embrace the ‘new normal’. The collaboration aims to optimize business operations and facilitate the seamless transition to the digital realm.

Per the deal, Cisco’s Webex Calling will be made available to AT&T’s enterprise clients. Webex Calling is an integrated phone service in the cloud that enables users to make or receive calls anywhere on any device. This subscription-based service offers centralized administration and security features for a complete enterprise-grade cloud calling and team collaboration solution. This, in turn, is likely to enable the hybrid workforce that largely intends to continue working from remote locations in post COVID-19 era an effective communication tool.

3.     Verizon Communications Inc. (VZ - Free Report) is offering its fleet customers an opportunity for seamless transition to 4G network connectivity as the legacy 3G network is slated for sunset by the end of 2022. With Verizon Connect solution, fleet operators will be able to migrate their vehicle tracking units to a faster 4G network that boasts extended wireless network coverage, higher bandwidth and lower latency.

Fleet operators had historically utilized 3G devices to track vehicles that often failed to provide precise data in remote locations that lacked extensive network coverage. By migrating to the 4G networks, fleet operators have been able to identify accurate location data for faster routing facilities by deploying the closest vehicle to a customer. This has increased the profitability and service quotient of firms like Trucking – an equipment rental service provider in the oil and gas industry – and KRP Rentals, both of which have already upgraded to 4G.

4.    Juniper Networks, Inc. (JNPR - Free Report) recently collaborated with NEC Corporation to augment the network capabilities of Herotel, the largest wireless service provider in South Africa, for the likely rollout of IP network based on segment routing principles across the country. The improvement in infrastructure facilities is expected to reduce the complexity of the network, while increasing operational flexibility and efficiency of Herotel.

5.     Viasat, Inc. (VSAT - Free Report) has partnered with the U.K.-based satellite operator — Avanti Communications Group plc — to augment its KA-SAT satellite network capacity and coverage across Western Europe and the Middle East as part of a Ka-band capacity lease agreement. The collaboration comes as a major development, ahead of the much-awaited ViaSat-3 satellite launch, over Europe, Middle East and Africa.

Moreover, the alliance is expected to boost Viasat’s in-flight connectivity segment and enable it to tap lucrative business opportunities, thereby strengthening its market penetration across various territories. Per the deal, Viasat will capitalize on Avanti’s satellites for the growth of its global mobility and enterprise businesses, particularly across energy, aviation and maritime. 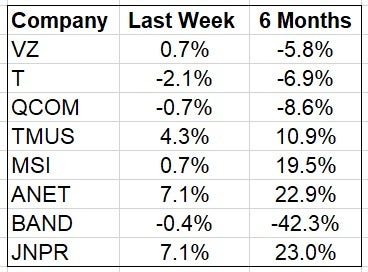 In the past five trading days, both Arista and Juniper have been the best performers with their stock gaining 7.1% each, while AT&T declined the most with its stock falling 2.1%.

Over the past six months, Juniper has been the best performer with its stock appreciating 23%, while Bandwidth declined the most with its stock falling 42.3%.

Over the past six months, the Zacks Telecommunications Services industry has gained 11.7% while the S&P 500 has rallied 15.6%. 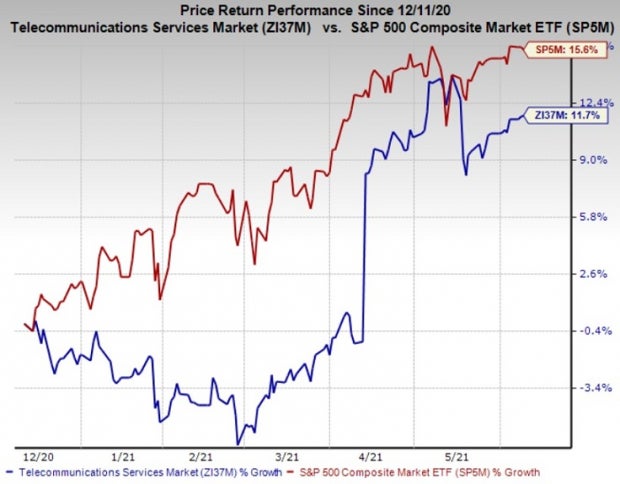