Valued at $3.12 billion, the contract is expected to be completed by Jun 8, 2036. Per the terms, Raytheon will manufacture, modernize and support the F-15 APG-82 radar system to rapidly deliver and stay aligned with the F-15 weapon system program.

Work related to the deal will be executed in El Segundo, CA.

Against the backdrop of the heightening geopolitical uncertainties around the world, a number of developing countries have significantly increased their defense spending. This, in turn, has bolstered the demand for defense products like combat jets, which form an integral portion of a nation’s defense, equipped with advanced technologies.

As the United States is the leading weapon exporter, its defense contractors enjoy a frequent flow of contracts for their combat-proven aircraft with the latest technological upgrade. To this end it is imperative to mention that radar systems constitute a crucial defense mechanism for combat aircraft, with their precise tracking capability of an incoming attack, and thus boast solid demand trend across the globe.

Raytheon Technologies being a prominent manufacturer of such radars in the United States thus witnesses frequent flow of contracts from the Pentagon, as well as foreign allies of the United States for its varied sensor products.

Raytheon Technologies and Boeing have now shared more than 35 years of success on numerous generations of the F-15 radar program. This legacy, along with shared experiences on the F/A-18E/F and APG-79, ensures the APG 82-equipped F-15E will remain a force multiplier for decades to come. The latest contract win is a bright example of that.

Surge in territorial battles worldwide and rapid advancements observed in radar technology over the past decade have been bolstering the global radar market. Looking ahead, the global RADAR industry is estimated to reach $44.35 billion by 2028, growing at a CAGR of 4.7% from 2021 to 2028, as predicted by Allied Market Research firm.

Raytheon Technologies, a Zacks Rank #3 (Hold) stock, has gained 41.4% in the past year compared with the industry’s growth of 38.9%. You can see the complete list of today’s Zacks #1 Rank (Strong Buy) stocks here. 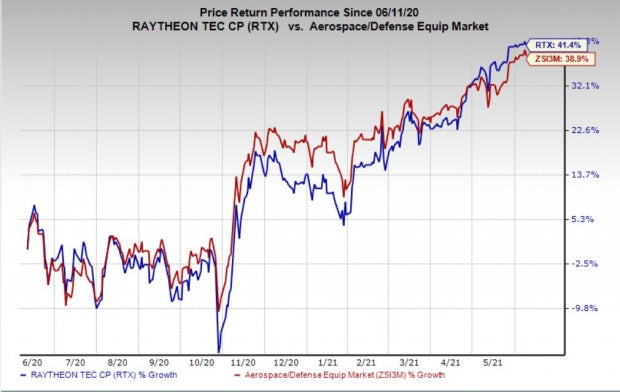