Management remains impressed with growth witnessed in the quarter, despite store closures that were undertaken as part of the company’s de-densification efforts. Also, temporary store closures in Europe due to pandemic were a drag. Progressing on its growth endeavors, the company has been on track with strengthening balance sheet. This includes noteworthy steps undertaken to eliminate long term debt. Also, the company intends to sell more shares under its “at-the-market” equity offering program (the “ATM Offering”) for bolstering financial position as well as aiding business transformation. Further, the company announced new inclusions to its board.

Moving on, management highlighted that second-quarter sales trend continue to reflect growth. Total sales in May increased nearly 27% year on year. However, the company continues to suspend the guidance for the fiscal year.

We note that shares of the company dropped 5.2% during the after-market trading hours on June 9.

Net sales amounted to $1,276.8 million, which surpassed the Zacks Consensus Estimate of $1,176 million and increased 25% on a year-over-year basis. Prudent efforts to boost digital business capabilities as well as product offerings contributed to the company’s performance in the quarter. Markedly, it was able to achieve top-line growth despite a 12% decline in store base owing to strategic de-densification strategy as well as continued store closures across Europe due to the COVID-19 pandemic.

Moving on, gross profit increased 16.9% year over year to $330.1 million. However, gross margin contracted 180 basis points (bps) to 25.9%. The downside was caused by increased mix of lower margin sales.

As of May 1, 2021, GameStop has cash and restricted cash amounting to $770.8 million. Cash and cash equivalents were $694.7 million. Moreover, the company ended the quarter with net short-term debt (including current portion of long-term debt) of $48.1 million and stockholders’ equity of $879.5 million. Compared with year-ago quarter’s figures, overall debt levels were reduced by $504 million. This reflects the redemption of $202 million of senior notes due in 2021, the voluntary early redemption of $216.4 million of 10% senior notes due in 2023 (which represented the company’s entire long-term debt) as well as the paydown of the company’s asset-based revolving credit facility worth $135 million. At the end of the quarter, the company had no borrowings under its asset-based revolving credit facility and no long-term debt.

We note that GameStop completed the sale of 3.5 million shares of its common stock through its ATM Offering program. It generated collective gross proceeds before commissions and offering expenses of nearly $551 million. The company intends to continue using the proceeds for accelerating its transformation efforts as well as for general corporate purposes and strengthening balance sheet. As a result of the ATM Offering, the company now has total shares outstanding of approximately 71.9 million. Additionally, the company announced a new ATM offering for a prospectus filing under which it may offer and sell up to 5 million shares.

For the 13-weeks ended May 1, 2021, the company’s net cash flows used in operating activities amounted to $18.8 million. The company incurred capital expenditures of $14.7 million during the first quarter. 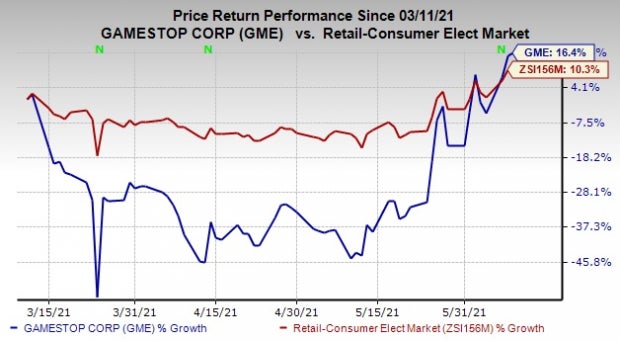 As part of the strategic store de-densification strategy, the company shuttered 118 stores during the first quarter. The company now operates 4,698 stores globally.

We note that GameStop is restructuring its board to fast track its growth efforts. In the recent past, the company appointed several board executives with significant experience in e-commerce, customer care and technology. Progressing along such lines, the company informed about the appointment of Matt Furlong as chief executive officer and Mike Recupero as chief financial officer. Both the veterans have previously worked for Amazon, where they held senior roles and oversaw various growth initiatives. Management informed that the company will continue to actively pursue senior talent procurement with adequate gaming, retail and technology-related experience. Going ahead, the company plans to continue investing toward bolstering technology infrastructure as well as expansion of fulfillment capabilities.

We note that shares of this Zacks Rank #3 (Hold) company have increased 16.4% in the past three months compared with the industry’s growth of 10.3%.

L Brands has a long-term earnings growth rate of 13%. It currently carries a Zacks Rank #2 (Buy).