Reasons to Retain Kinsale Capital (KNSL) in Your Portfolio

The company has a decent surprise history, having delivered an earnings beat in three of the last four reported quarters, while missing in one, with an average beat of 12.55%.

Kinsale Capital currently carries a Zacks Rank #3 (Hold). In the past one month, the stock has gained 2.1% compared with the industry’s increase of 0.7%. 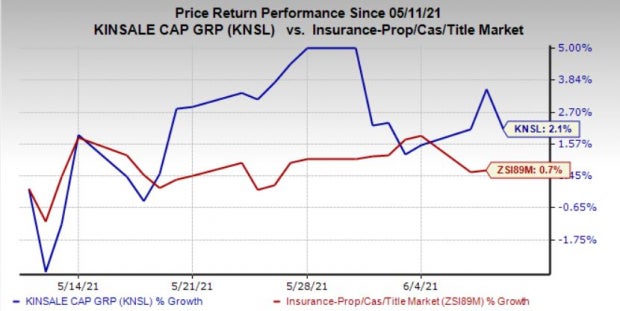 Kinsale Capital’s return on equity ("ROE") for the trailing 12 months is 15%, comparing favorably with the industry’s 5.6%, reflecting the company’s efficiency in utilizing shareholders’ funds. It targets to maintain operating ROE in the mid-teens range over a long term.

The company is well poised for progress, as is evident from its favorable VGM Score of B. Here V stands for Value, G for Growth and M for Momentum, with the score being a weighted combination of all three factors.

It has an impressive Growth Score of A. This style score analyzes the growth prospects of a company.

With focus on the E&S market across the United States, Kinsale Capital basically targets clients with small- and medium-sized accounts, which have better pricing and are less prone to competition. Thus, the insurer is poised to deliver improved margins and lower loss ratios.

The company boasts of having the best combination of high growth and low combined ratio among its peers and targets the same in mid-80s range over the long term.

Kinsale Capital has developed a proprietary technology platform, which is likely to provide it a competitive edge over other industry players and support improved expenses ratio.

Kinsale Capital remains well poised to benefit due to continued market dislocation, as it has resulted in improved submission flows and better pricing decisions.

Cincinnati Financial delivered an earnings surprise of 30.48% in the last-reported quarter.

HCI Group delivered an earnings surprise of 28.33% in the last-reported quarter.

Here's Why You Should Add FedEx (FDX) to Your Portfolio Now