Vertex's (VRTX) Trikafta Gets FDA Nod for CF in Children

Vertex Pharmaceuticals Incorporated (VRTX - Free Report) announced that the FDA has granted approval to its triple combination therapy, Trikafta, to treat cystic fibrosis (“CF”) in children aged six to 11 years who have at least one F508del mutation in the cystic fibrosis transmembrane conductance regulator (“CFTR”) gene or a mutation in the CFTR gene that is responsive based on in vitro data.

We remind investors, that in January 2021, the FDA accepted and granted priority review to Vertex’s supplemental new drug application for the label expansion of Trikafta to include children aged six through 11 years.

We note that Trikafta is presently approved for treating patients aged 12 years and above with CF who have at least one F508del mutation in the CFTR gene, in several countries including the United States, Switzerland, Australia and Israel, and as Kaftrio (brand name of Trikafta in EU) in the European Union and United Kingdom.

The company has also submitted applications seeking approval of Kaftrio for use in children aged six through 11 years in Europe and the United Kingdom. Vertex also plans to submit the label expansion filing for Trikafta/Kaftrio in Switzerland, Australia and Israel later this year.

Shares of Vertex have plunged 9.6% so far this year compared with the industry’s decrease of 1.6%. 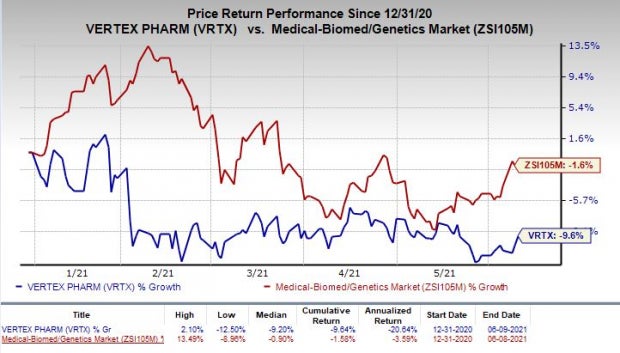 In the first quarter of 2021, Trikafta generated sales worth $1.19 billion, up 33.3% year over year, driven by the high level of treatment penetration in the United States and strong launch in international markets. Trikafta/ Kaftrio is crucial for Vertex’s long-term growth as it has the potential to treat up to 90% of CF patients.

It has seen substantial uptake across all European countries where the company secured reimbursement agreements, most importantly in the large markets of Germany and the United Kingdom.

Additional reimbursement approvals of Kaftrio in EU countries and approval for younger patient populations could bring additional Trikafta revenues in 2021.