Mid-cap stocks often display stronger growth characteristics than others. That’s because they’ve been around long enough to weather the ups and downs that come with a small cap both on account of the relatively limited resources and because the business model might need tweaking. When a company’s stock moves from the small to the mid cap category, chances are its business model has already proved itself and cash flows have grown steadier.

Also, mid-caps often generate accelerated earnings and cash flow growth as the business gathers momentum, helping them outperform large-cap stocks. At the same time, fewer analysts could be covering them, leading to a situation where less is known about them. As a result, there could be information about these companies that are not always reflected in share prices.

The Russel Mid Cap Index clearly outshone the S&P 500 and the Dow Jones over the past year and returned almost as much as the tech-heavy Nasdaq. The index pulled ahead particularly after November 2020. This seems to indicate that the vaccines and the opening up of the economy has had a positive effect. If that is true, awe should be probably be studying mid caps more diligently right now.

Other than a Zacks buy rank and Growth Score of A, the following 5 stocks have an average daily volume (over the past 20 days) of over a million shares. So clearly, investors are interested in trading in them. Their year-to-date performance shows double and triple-digit gains, indicating a “Buy” sentiment.

Other criteria chosen include a debt/cap ratio that’s less than 41% and at least double-digit EPS surprises in the preceding four quarters. The goal was to select mid cap stocks with growth potential that carry a relatively small amount of risk. 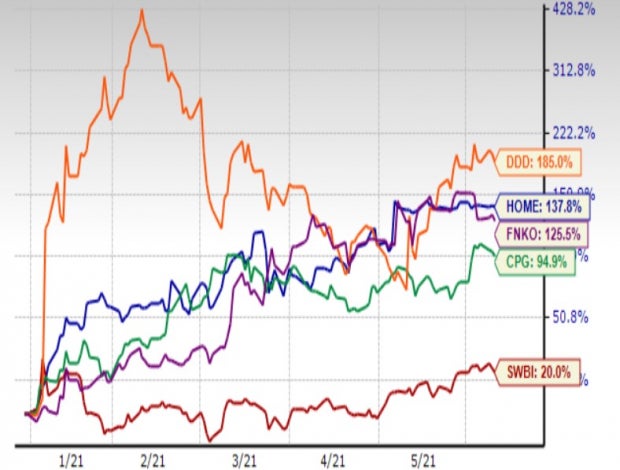 Calgary, Canada-based Crescent Point Energy Corp. is engaged in the acquisition, exploration and development of light and medium oil and natural gas properties in Western Canada. It is strategically focused in core areas of southern Saskatchewan and central and southern Alberta.

The shares carry a Zacks Rank #2 (Buy), Value Score B and Growth Score A. The average daily volume is over 4.2 million shares.

Its earnings are expected to grow 132.0% this year and 27.6% in the next. But since it has topped the estimates provided by the lone analyst at double and triple-digit rates in the last four quarters, averaging 163.8%, these estimates could also prove conservative.

The shares carry a Zacks Rank #2 and Growth Score A. The average daily volume is over 6.2 million shares.

The company operates in the Computer - Mini computers industry, which is in the top 12% of Zacks-classified industries.

Analysts currently expect its earnings to grow 436.4% this year and 11.4% in the next. Its surprise history is mixed, but the preceding four-quarter average of 123.2% is good.

DDD has no debt.

The Zacks Rank #2 company has a Value Score B, Growth Score A and Momentum Score B. Its average daily volume of over a million shares.

The Consumer Products – Discretionary industry to which it belongs is in the top 44% of Zacks-classified industries.

The six analysts providing estimates for this stock see its earnings growing 194.6% in the current year, followed by 14.3% growth next year. The company has posted triple-digit positive surprises in each of the last three quarters and a double-digit surprise in the quarter before that. The four-quarter average of 138.4% is extremely encouraging.

Headquartered in San Antonio, TX, At Home Group is a leading home decor superstore. The company offers more than 50,000 Stock Keeping Unit (SKUs) across a wide range of home products, including furniture, mirrors, rugs, art, houseware, tabletops, patios and seasonal décor through its 226 stores in 40 states. More than 75% of its products are unbranded, private label or specifically designed.

The Zacks Rank #2 stock has Value, Growth and Momentum Scores of B, A and A, respectively. Its average daily volume is a million+ shares.

It is part of the Retail - Home Furnishings industry (top 9%).

For the year ending Jan 2022, analysts expect its earnings to decline 32.8% due to difficult comps and grow 11.7% the following year. The company has topped estimates in each of the last four quarters at an average rate of 30.7%.

The Zacks Rank #1 (Strong Buy) stock, which has Value and Growth Scores of A, belongs to the Leisure and Recreation Products industry (top 10%). The average daily volume of its shares traded is nearly 1.2 million.

In the year ending in April, analysts expect its earnings to grow 392.7%. this will be followed by a 45.5% decline in 2022, as things normalize. Needless to say, this is not a negative since the expected earnings for 2022 of $2.20 is more than double the earnings of 82 cents generated in 2020. The earnings surprise history is also encouraging: SWBI topped estimates at a double-digit rate in each of the last four quarters, averaging 48.7%.

The company has only a small amount of debt, with the Debt/Cap ratio at a mere 14.11%.