First Solar Inc. recently revealed plans to invest $680 million for constructing a new solar panel factory in Ohio. On acquiring necessary permits, the construction is expected to start in the first half of 2023 and reach full production by 2025.

This factory would be First Solar’s third factory in the United States, which will manufacture an enhanced thin-film photovoltaic (PV) solar module for the utility-scale solar market. With an initial annual manufacturing capacity of 3.3 gigawatt-direct current (GWdc), the plant will eventually expand the company’s U.S. manufacturing footprint to 6 GWdc.

To meet the expanding demand in the solar market, during the first quarter of 2021, First Solar commenced commercial production of Series 6 modules at its second facility in Malaysia. This might have enabled the company to produce a solid 1.7 GW of solar modules in the first quarter, which represented a 32% surge in Series 6 module production from the same period in 2020.

Looking ahead, in 2021, First Solar intends to make investments of $425-$475 million, as it aims at expanding its module wattage as well as capacity and throughput at its manufacturing facilities. This, along with the latest factory set up in Ohio, would allow the company to duly increase its nameplate Series 6 manufacturing capacity to 9.4 GWDC by 2022-end, from a capacity of 7.9 GWDC at March-end.

In recent times, the price of solar modules in the United States has significantly plummeted due to improved labor productivity, low supply-chain costs and higher module efficiency, thus lowering the overall price of solar projects. Furthermore, strong federal policies like solar investment tax credit (ITC) have induced more growth in the U.S. solar industry. Per SEIA, residential and commercial solar ITC has helped the U.S. solar industry register average annual growth of 50% over the last decade alone. These factors have been boosting the prospect of the U.S. solar market.

Per a Research and Market report, solar is expected to account for 39% of the all-new U.S. electricity generation capacity in 2021, surpassing wind for the first time. Furthermore, from a long-term perspective, Technavio has forecasted the residential solar market in the United States to grow by $5.99 billion, at a CAGR of more than 10%, during 2021-2025.

Such notable projections will most likely boost First Solar’s growth prospects in the times to come. Other prominent solar stocks with a strong presence in the U.S. solar market, such as SunPower Corp. (SPWR - Free Report) , Enphase Energy (ENPH - Free Report) and Canadian Solar (CSIQ - Free Report) , also remain poised to benefit from such developments.

In the past six months, shares of this Zacks Rank #3 (Hold) company have only declined 7.8% compared to the industry’s 26.4% decline. You can see the complete list of today's Zacks #1 Rank (Strong Buy) stocks here. 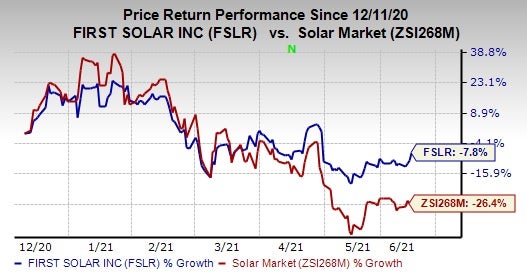