Shares of Signet Jewelers Limited (SIG - Free Report) went up nearly 14% during the trading session on Jun 10, following robust first-quarter fiscal 2022 results. Markedly, the company’s top and bottom line beat the Zacks Consensus Estimate as well as improved year over year. This was the company’s fourth straight quarter of sales and earnings beat.

Performance in the quarter gained from strong growth witnessed in the e-commerce realm as well as across the company’s portfolio. Management highlighted that the company’s Inspiring Brilliance strategy has been yielding and supporting market share growth. The company continued to witness growth across Kay, Zales, Jared and Piercing Pagoda brand banners, backed by efficient consumer-oriented strategies. Moreover, the company’s connected commerce strategy has been helping to deliver higher conversion rates as well as growth across online and in-stores.

Apart from these, the company continues to focus on building innovative product offerings, strengthening digital capabilities and expanding marketing channels. It also strives to continue enhancing liquidity through a disciplined approach toward cash and inventory.

We note that the company raised its fiscal 2022 expectations and also provided an encouraging view for the second quarter.

In the past three months, shares of this Zacks Rank #2 (Buy) company have gained 18.9% compared with the industry’s rise of 14%. 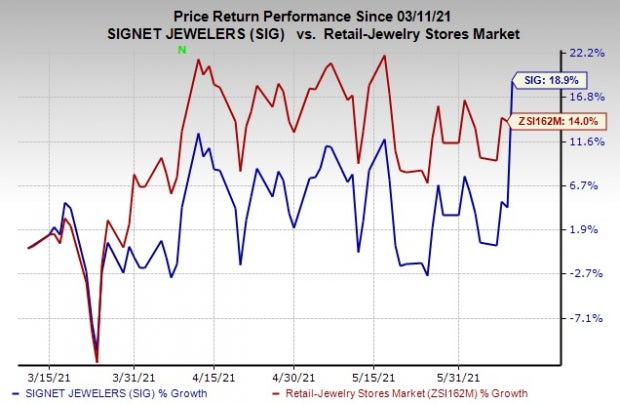 The jewelry retailer reported adjusted earnings of $2.23 per share, which beat the Zacks Consensus Estimate of $1.41. The bottom line improved significantly from a loss of $1.59 reported in the year-ago quarter.

The company generated total sales of $1,688.8 million that surpassed the Zacks Consensus Estimate of $1,602 million. The top line also increased 98.2% (up 96.4% in constant currency) year over year, backed by broad-based growth across formats, regions, channels, and categories. Markedly, the company’s revenues during the quarter were supported by higher conversion and average order value, despite lower traffic. Further, total same-store sales surged 106.5% year on year.

Meanwhile, e-commerce sales amounted to $346.3 million that skyrocketed 110.3% from the prior-year quarter’s level. The company’s brick-and-mortar same-store sales were up 105.7% year on year.

A Sneak Peek Into Margins

Gross profit in the reported quarter amounted to $678.4 million, up significantly from $204.2 million in the year-ago quarter. Gross margin expanded 1,630 basis points (bps) to 40.2%, mainly owing to the leveraging of fixed costs such as occupancy.

Selling, general & administrative expenses increased 42.9% year on year to $512 million. Further, the company reported an adjusted operating income of $168.9 million, which accounted for 10% of sales. The figure improved considerably from adjusted operating loss of $142.5 million in the prior year quarter.

Same-store sales in the International segment declined 12.2% year over year. ATV increased 5.8%, while the number of transactions fell 16.6% due to mandated store closures in the U.K. Meanwhile, e-commerce sales rose 80%, while brick-and-mortar same-store sales declined 40.9%.

Signet ended the quarter with cash and cash equivalents of $1,298.4 million, accounts receivable, net of $78.9 million as well as net inventories of $2,019 million. Long-term debt was $146.8 million and total shareholders’ equity was $1,320.6 million at the end of the quarter. Total liquidity was $2.5 billion at quarter end, consisting of cash and cash equivalents as well as $1.2 billion available on the revolving credit facility.

For 13-weeks ended May 1, 2021 the company generated net cash of $161.1 million from operating activities. It had a free cash flow of $149.8 million during the aforementioned period.

Further, management stated that the company will be reinstating its dividend program. Accordingly, it has declared a quarterly cash dividend of 18 cents per share for the second quarter of fiscal 2022, payable on Aug 27, 2021 to shareholders of record as on Jul 30, 2021, with an ex-dividend date of Jul 29, 2021.

For second-quarter fiscal 2022, management expects revenues of $1.60-$1.65 billion. In the year-ago quarter, the company’s revenues were $888 million. The Zacks Consensus Estimate for second-quarter revenues is currently pegged at $1.26 billion.

Additionally, the company expects same-store sales to be between 76-82% in the second quarter. Adjusted operating income is expected to be $118-$130 million.

Moving on, the company raised its expectation for fiscal 2022. The company now expects revenues in the bracket of $6.50-$6.65 billion compared with the prior projection of $6-$6.14 billion. During fiscal 2021, the company incurred revenues of $5.23 billion. The Zacks Consensus Estimate for revenues for the fiscal year is currently pegged at $6.14 billion.

The company expects to incur sturdy sales during the first half of the year. With the progress of the roll-out of vaccinations, management expects a shift in consumer discretionary spending, away from the jewelry category toward experience-oriented categories. Nevertheless, the company plans to increase marketing investments to keep supporting growth in revenues as well as to effectively manage shift in consumer spending. Further, management expects same-store sales to be negative in the second half of the year.

For fiscal 2022, the company expects to generate gross cost savings worth $75-$95 million, up from the earlier projection of $50-$75 million. Rise in saving expectations reflect on the company’s enhanced relationships with credit partners ADS and Genesis. The company’s cost savings are expected to drive SG&A and gross margin metrics. Moreover, such savings are expected to mitigate the additional investments required in digital and technology for boosting the company's competitive advantage.