Occidental Petroleum (OXY - Free Report) announced that it has entered into a definitive agreement to sell non-core assets in the Permian Basin to a unit of Colgate Energy Partners III, LLC for $508 million. The deal is expected to close in third-quarter 2021, subject to necessary approvals. Occidental intends to utilize the net proceeds to further lower outstanding debt and reduce capital servicing costs.

This deal will include 25,000 net acres in the Southern Delaware Basin in Texas, with production of nearly 10,000 barrels of oil equivalent per day from 360 active wells. However, this deal is not going to alter the total production level and its capital expenditure guidance for 2021. Occidental expects to invest $2.9 billion in 2021 and total production to be 1,140 thousand barrels of oil equivalent per day (Mboe/d).

Occidental has taken substantial debt from the market to fund the Anadarko Petroleum acquisition. It outplayed Chevron Corporation (CVX - Free Report) in the acquisition battle. This deal expanded Occidental’s presence in the Permian Basin. At the same time, this deal substantially increased the company’s debt level. It is working continuously to lower the debt level through funds generated from operations and non-core asset divestitures. Occidental has been successful in extending its near-term $7-billion debt maturity beyond 2025 and repaid nearly $9.6 billion debt.

Occidental has already completed more than $9 billion non-core asset divestment out of the $10-billion divestiture target and a substantial portion of the net proceeds is utilized by it to lower outstanding debts. The company is on course to achieve the non-core asset divestment target of $2-$3 billion for 2021 and this deal takes the year-to-date total divestiture to $1.3 billion. Occidental prefers to wait for serious buyers who will ensure that it gets the full value of assets, rather than those that are willing to purchase the same at a discount.

In the past month, shares of Occidental have outperformed the industry. 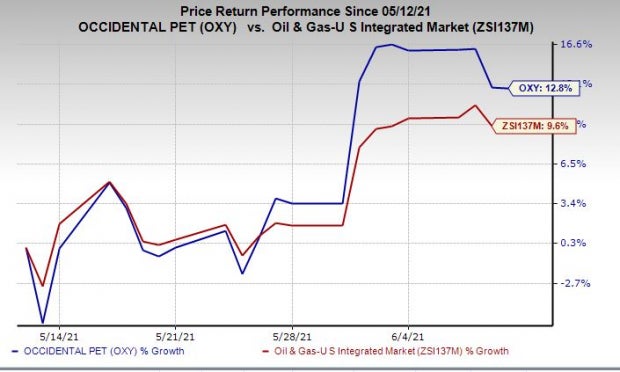 The Zacks Consensus Estimate for 2021 earnings per share for PetroChina Company and Suncor Energy has moved up 67.7% and 122.1%, respectively, in the past 60 days.