Exxon Mobil Corporation (XOM - Free Report) has been generating fewer barrels of oil from the prolific shale fields of the United States since 2019, per Reuters.

According to a latest report, the company’s oil wells, which are involved in some of the most promising shale fields, produced fewer barrels of oil per well despite an increase in overall expenditure and production.

Per data released by the Institute for Energy Economics and Financial Analysis (“IEEFA”), Exxon's average liquid output for the first 12 months of a well dropped to 521 bpd in 2019 from an average of 635 bpd in 2018 in its Delaware basin assets of New Mexico.

Notably, the company went down to the sixth place from the first on a per-well production basis, falling behind a group of publicly traded producers like Occidental Petroleum Corporation (OXY - Free Report) and EOG Resources, Inc. (EOG - Free Report) . Full data for 2020 is currently unavailable but initial findings suggest that the company's Delaware wells continued to lag.

However, in March, Exxon reported that its per-well profits in the New Mexico operations remained steady between 2018 and 2020. Moreover, its Permian assets have met or exceeded its volume projections per year for six years.

The company, which is also involved in the Midland portion of the Permian basin, ranked 12th out of 20 in 2019, based on an output measure that normalizes for well length. Importantly, its average production over a well's first 12 months improved between 2018 and 2019.

According to the data released by IEEFA, Exxon's shortfall in production per well came as oil output in the Permian basin grew by an average of about 5%. Although U.S. shale production in the Permian improved significantly last decade, it has slowed in recent years as oil companies focus on profit over output. However, most analysts opine that the company’s actual production is not living up to what they seem to be claiming.

Shares of the company have outperformed the industry in the past six months. The stock has gained 48.7% compared with the industry’s 24.5% growth. 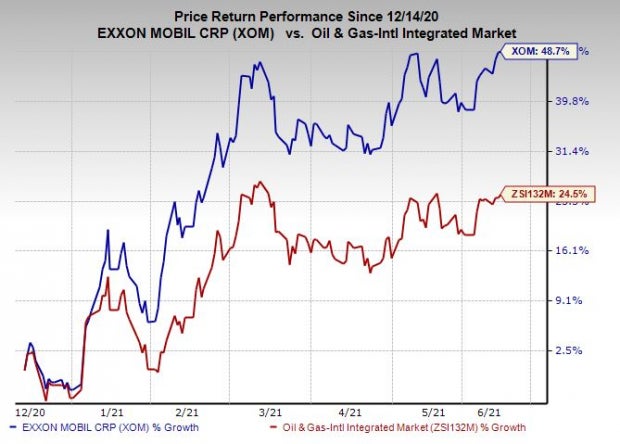 Over the past 60 days, the Zacks Consensus Estimate for Whiting Petroleum’s 2021 earnings has been raised by 134.9%.