Why You Should Invest in DICK'S Sporting (DKS) Right Away

DICK’S Sporting Goods, Inc. (DKS - Free Report) is worth giving a shot right now as its sound fundamentals and growth efforts look impressive. The Zacks Rank #1 (Strong Buy) stock boasts of a VGM Score of B. Notably, shares of this company have rallied 29.8% in the past three months against the industry‘s decline of 0.5% and the Retail-Wholesale sector’s decrease of 2%.

That said, let’s delve into the factors that make the stock a promising bet.

DICK’S Sporting has been gaining from significant investments in e-commerce, technology, store payroll, Team Sports and private brands. The company has been witnessing strong online demand on the back of improved omnichannel capabilities, including curbside pickup services and BOPIS. Notably, e-commerce grew 14% in the first quarter of fiscal 2021, representing nearly 20% of net sales. The upside can be attributed to increased consumer adoption of in-store pickup and curbside facilities. Also, its stores fulfilled more than 70% of online sales to meet customers’ growing online demand.

The company has been making efforts to strengthen its store network. Keeping in these lines, it recently opened the second DICK'S House of Sport in Knoxville, TN, following the first store in Victor, NY. These storesare performing well and is on track to become one of the highest volume stores. Alongside this, it launched two newly redesigned Golf Galaxy locations, three Warehouse Sale locations, experiential in-store Soccer Shops in select locations and one relocated DICK'S Sporting Goods store in June. Prior to this, management launched one DICK'S Sporting Goods location, one Warehouse Sale location and two locations of a new off-price store concept — Going, Going, Gone! — in May.

Driven by a solid online show on the back of an enhanced supply chain as well as expanded technology and omnichannel capabilities along with a robust product portfolio, DICK’S Sporting has been leveraging solid demand for golf, outdoor activities, home fitness and active lifestyle. These factors led to better-than-expected first-quarter fiscal 2021 results, wherein both top and bottom lines improved year over year. Also, strength in hardlines, apparel and footwear remained upsides. Management raised the fiscal 2021 guidance. Fiscal 2021 sales are expected to be $10,515-$10,806 million, up from the prior view of $9,544-$9,935 million. Same store sales are likely to be up 8-11% as compared to the earlier guided view of down 2% to up 2%.

The Zacks Consensus Estimate for fiscal 2021 earnings is pegged at $8.25 per share, reflecting an increase of 3.6% in the past seven days. 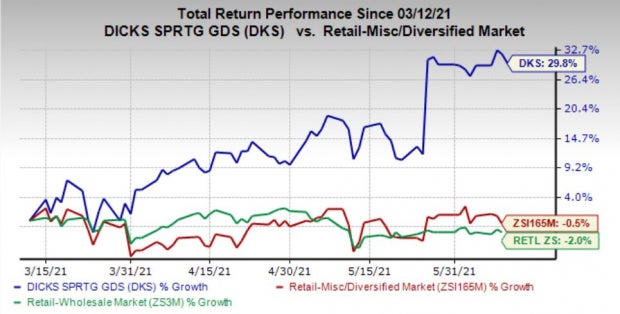 Other Stocks in the Retail Space

Hibbett Sports (HIBB - Free Report) has a Zacks Rank #1 and a long-term earnings growth rate of 8.5%. You can see the complete list of today’s Zacks #1 Rank stocks here.