May auto sales data for China — the world’s largest car market — was released last week. Per the China Association of Automobile Manufacturers, vehicle sales in the country dipped 3% year over year to 2.13 million units, snapping a 13-month winning streak. While the global chip crunch and soaring commodity costs hit the automakers, electric vehicles managed to sustain momentum, with sales of new energy vehicles surging a whopping 160% year over year to 217,000 units in May.

Lithia Motors (LAD - Free Report) announced the acquisition of two luxury dealerships in Van Nuys, CA, being BMW of Sherman Oaks and Acura of Sherman Oaks. Both the stores serve the greater Los Angeles area. The transaction expanded Lithia’s footprint to Southern California as the BMW store is Lithia’s first store in Southern California. Moreover, the buyout is anticipated to add $185 million in combined annualized revenues. The deal has been financed through the existing on-balance sheet capacity.

Navistar reported second-quarter fiscal 2021 adjusted earnings of 72 cents per share, beating the Zacks Consensus Estimate of 38 cents and comparing favorably with the year-ago loss of 10 cents. The truck maker posted total revenues of $2,162 million, missing the consensus mark of $2,296 million. However, the top line increased from the year-ago level of $1,925 million. As of Apr 30, 2021, Navistar had cash and cash equivalents of $1,233 million and a long-term debt of $4,624 million. The company remains on track to close the merger with TRATON by mid-2021.

Ford unveiled its newest and most affordable compact pickup truck, 2022 Ford Maverick, a dream truck for customers. The Maverick starts at $21,490 ($19,995 MSRP plus $1,495 for destination) for the base model. With the 2022 Maverick, Ford is providing an undefeatable solution to satisfy customer demand for small trucks. This vehicle is designed to appeal to small-car buyers, people who never knew they wanted a pick-up in the first place. The Maverick will hit the market later this fall and customers can place an order for the same on Ford’s website. (Here's All You Need to Know About Ford's 2022 Maverick Trucklet)

Goodyear Tire & Rubber (GT - Free Report) announced the conclusion of the impending acquisition of Cooper Tire & Rubber Company. The buyout will bring an array of tire brands under a single roof, including Goodyear’s Dunlop and Kelly brands, and Cooper’s Mastercraft and Mickey Thompson brands. The merged entity will bank on Goodyear’s dominance in original equipment and premium replacement tires, and combine it with Cooper’s forte in the light truck and SUV segments, thus providing a more complete offering to customers. The historic deal marks the collaboration of two of the biggest American tire companies. 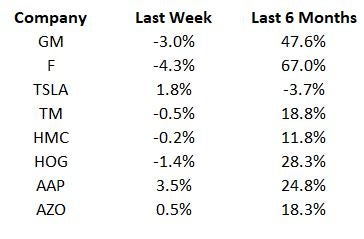 Industry watchers will track the passenger car registrations data in European Union for May 2021, which is likely to be released by European Automobile Manufacturers Association later this week.