Equinor ASA (EQNR - Free Report) recently came up with discouraging results of two wildcat wells near the Fram field in the North Sea, offshore Norway, per reports. The company drilled wildcat wells 35/11-25 S and 35/11-25 A, the permits of which were acquired in April.

The wells are located in the production license 090, wherein operator Equinor has a 45% stake. It has VårEnergi AS (25%), a subsidiary of Eni SPA (E - Free Report) , as partner in the license along with Idemitsu Petroleum Norge AS (15%) and Neptune EnergyNorge AS (15%). Notably, these two exploration wells are the 19th and 20th ones in the license area.

The 35/11-25 S well was drilled to prove the presence of hydrocarbons in late Jurassic rocks, while the 35/11-25 A well was looking for petroleum in the Etive Formation of Middle Jurassic age. However, both the wells came up dry. The company has permanently plugged and abandoned the two wells, which were drilled at a water depth of 352 meters. The Deepsea Atlantic drilling rig was utilized at the site, which is now expected to move to wildcat well 31/11-1 S, located in production license 785 S of the North Sea.

Equinor has strong operations spreading across 30 countries. Apart from being the second-largest supplier of natural gas in Europe, it is also a leading seller of crude oil. It made 16 commercial oil and gas discoveries in 2019 and 2020 each. In the March quarter of 2021 alone, the company completed four commercial discoveries. Some of the notable discoveries were made at the U.S. Offshore Gulf of Mexico and Brazil’s Santos basin. All the discoveries are likely to help Equinor reach a compound annual oil-equivalent production growth rate of 3% through 2026.

Shares of the company have gained 50.5%, outperforming the industry’s 23% growth in the past year. 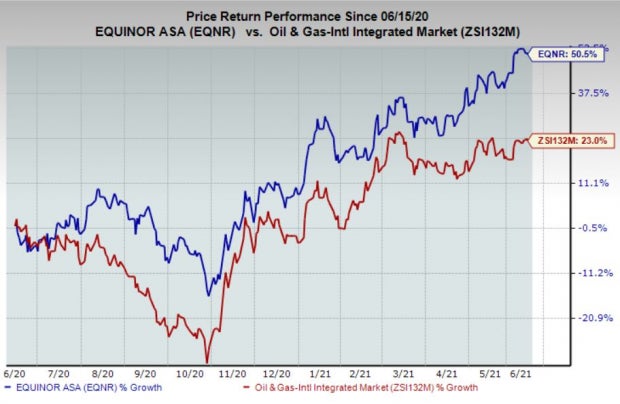 The company currently has a Zacks Rank #3 (Hold). Some better-ranked players in the energy space include Earthstone Energy, Inc. (ESTE - Free Report) and PHX Minerals Inc. (PHX - Free Report) , each having a Zacks Rank #2 (Buy). You can see the complete list of today’s Zacks #1 Rank (Strong Buy) stocks here.