The company mentioned that the FDA had previously requested for additional data during the review of the BLA. The company has already submitted the required data to the regulatory authority, which deemed the information as major amendment to the BLA and will require additional time for review. Hence, the FDA extended the review period.

The company has been preparing for launch of the candidate in the third quarter, which should get delayed due to this extension. A regulatory application seeking approval for lonapegsomatropin for pediatric GHD is under review in Europe. A decision is expected in the fourth quarter of 2021.

Shares of Ascendis have declined 21.9% so far this year against the industry’s increase of 1.1%. 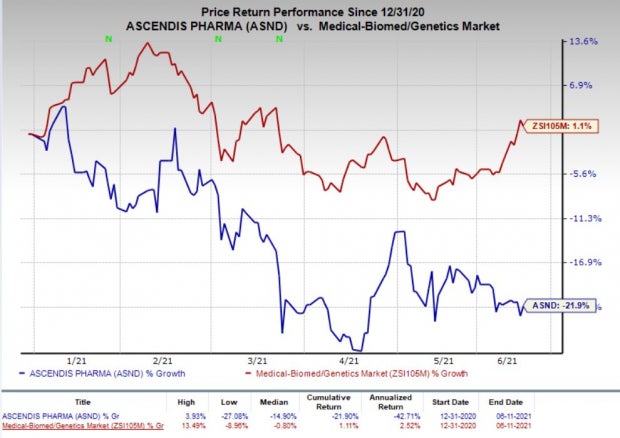 The company has developed lonapegsomatropin using its innovative technology platform, TransCon, designed to create new therapies that optimize therapeutic effect. Meanwhile, we note that lonapegsomatropin enjoys Orphan Drug designation for GHD in both the United States and Europe. However, some large as well as small biotechs are also engaged in developing treatment for GHD including Novo Nordisk (NVO - Free Report) , Pfizer (PFE - Free Report) and I-Mab Biopharma (IMAB - Free Report) .

Apart from lonapegsomatropin, the company is also evaluating multiple other pipeline candidates developed using TransCon. Key among them include, TransCon CNP and TransCon PTH. A phase II study is evaluating TransCon CNP for the treatment of achondroplasia, the most common form of dwarfism. TransCon PTH is being evaluated in a phase III study as a potential treatment for hypoparathyroidism in adult patients. Top-line data from the late-stage study is expected in the fourth quarter of 2021.