CIT Group Inc. is selling its $800-million aviation loan portfolio to KKR & Co. Inc. (KKR - Free Report) , as it moves ahead with fully exiting its aircraft lending business. The portfolio comprises more than 50 loans for nearly 60 commercial aircraft and the loans have an average yield in the mid-single digits and a four-year average remaining term.

Notably, AV AirFinance Limited will service the portfolio. AV AirFinance is a global commercial aviation loan servicer established by a team of experienced industry professionals together with KKR & Co.

The president of CIT Group Asset Management and Capital Markets, Phil Robbins, stated, “We are pleased to have reached an agreement with a team that understands the aviation lending business and will serve customers well. This transaction allows CIT to rebalance our portfolio mix and reinvest in core businesses.”

KKR & Co.’s co-head of Private Credit, Dan Pietrzak said, “The purchase of this loan portfolio from CIT will be used to seed the launch of our aviation lending business in partnership with AV AirFinance. This transaction marks an exciting new expansion of our asset-based finance strategy into directly originated and held commercial aviation loans, and we believe AV AirFinance is well positioned to become a premier lender for the global commercial aviation market.”

With a goal to simplify operations and become a regional commercial banking institution, CIT Group has been restructuring its business. In an effort toward this direction, it announced an all-stock merger deal with First Citizens BancShares, Inc. (FCNCA - Free Report) , which will lead to the formation of the 20th largest bank in the United States based on assets.

So far this year, shares of CIT Group have gained 47.3% compared with 15.1% growth recorded by the industry. 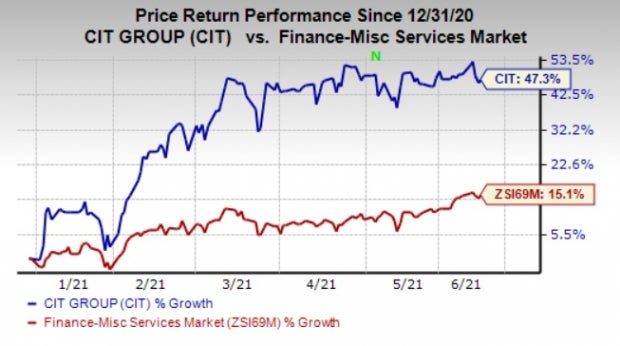