The contract was awarded by the Naval Supply Systems Command Weapon Systems Support, Mechanicsburg, PA. Work related to the deal will be performed in Charlottesville, VA, and is expected to be completed by June 2026.

The DDG 51 Arleigh Burke-class missile destroyers’ importance continues to grow over time as these ships offer a wide range of advanced warfighting capabilities in multi-threat air, surface and subsurface environments. It also offers protection against a wide range of threats, including ballistic missiles.

Furthermore, recently in June, the first DDG 51 Flight III destroyer has been launched by Huntington Ingalls, which is expected to provide much-enhanced warfighting capabilities to the U.S. Navy. So, in the near future, we may expect Northrop Grumman to design and provide integrated bridge systems and other important components to the upgraded version of the DDG 51 ship. Such prominent demand trends and favorable projections place Northrop Grumman in an advantageous position in serving the global shipbuilding market.

Shares of Northrop Grumman have gained 18% in a year compared with the industry’s growth of 17.2%. 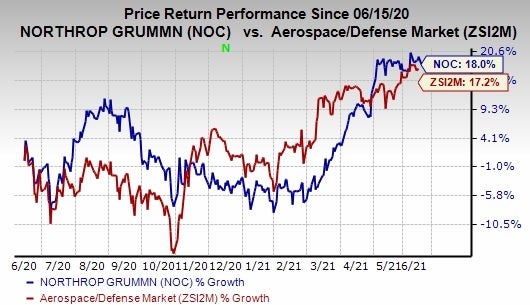