Finance sector earnings were up +25% in 2018 Q1 and the expectation is that growth in the Q2 earnings season, which JPMorgan (JPM - Free Report) , Wells Fargo (WFC) and Citigroup (C) kick-off with their results on Friday July 13th, will likely be as good. But none of that shows up in the group’s stock market performance, with bank stocks one of the weakest performers in the market.

Bank stocks are down -5.7% this year, underperforming the broader market’s +2.6% gain and the Finance sector’s -4.8% decline. The group never got its mojo back after losing ground at the start of February, but continued to lead the S&P 500 through mid-March meaningfully diverging from the broader index around mid-May. The chart below shows the year-to-date performance comparison of the Zacks Major Banks industry and the S&P 500 index. 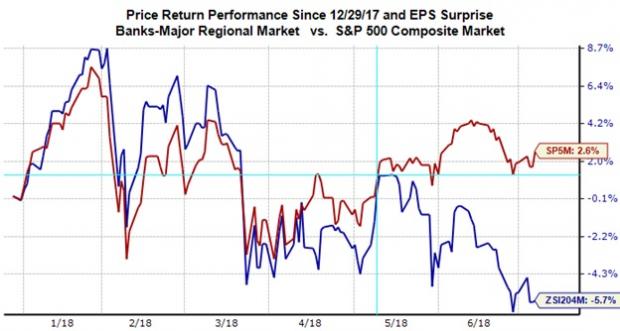 The biggest reason for this recent underperformance is the interest rate uncertainty, which has forced yields on the benchmark 10-year Treasury bond to generally move sideways and down after peaking at 3.11% in mid-May. On top of this lack of follow through in long-term yields, shorter maturity yields have been steadily going up, primarily in response to the well telegraphed Fed moves and trajectory. As a result, the yield spread between shorter maturity treasury bonds and longer maturity instruments has been steadily coming down and currently remains at its lowest level in a very long time. The chart below shows the yield spread between 2- and 10-year treasury bonds over the past year (currently at 30 basis points, as of Tuesday, July 3rd). 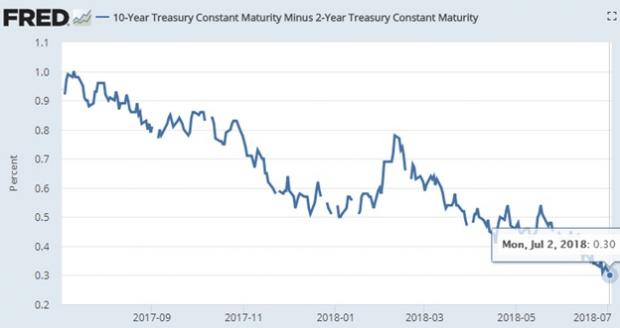 The reason we are talking about treasury yields and interest rates in a discussion about bank earnings is that Interest rates act like oxygen for banks. The low interest rates of the last few years, resulting from a deliberate Fed policy, had put a lid on banks’ earnings power. Net interest margin, the difference between what banks pay their depositors and what they charge lenders, has been flat to down for the last few years. With revenue growth hard to come by as a result of this backdrop, banks were forced to maintain profitability by squeezing expenses out of their operations.

The above chart showing yield spread between 2- and 10-treasury bonds goes to the core of the market’s dilemma about bank stocks and net interest margins and bank profitability are a function of this yield spread. The fear in the market is that banks wouldn’t benefit from Fed tightening as long-term rates remain subdued even as short-term rates have been going up.

This phenomenon, generally referred to as a ‘flattening of the yield curve’, is the reason why everyone in the market is so sour on bank stocks at present. I don’t agree with this view and see banks as one of a few areas in the market that represent genuine value. But this note isn’t about my investment outlook for banks, but rather the group’s earnings picture that starts getting clearer with Friday’s releases from JPMorgan, Wells Fargo and Citigroup. On a related note, we hold two of these three stocks in the Zacks Focus List portfolio.

What Are Banks Expected to Report in Q2?

Looking at the group in the aggregate, results from capital markets and investment banking should be flat from the year-earlier level, with modest loan growth and some net interest margin gains complementing continued cost controls. Key points of interest on the conference calls will be trends in loan portfolios which have failed to live up to expectations and management’s plans on capital returns that recently got the Fed’s nod in the latest Comprehensive Capital Analysis and Review (CCAR) aka Fed Stress Tests.

For the Finance sector as a whole, of which the Major Banks industry account for roughly 45% of total earnings, total Q2 earnings are expected to be up +18.4% from the same period last year on +3.8% higher revenues. This would follow +25.1% earnings growth in 2018 Q1 on +4.8% higher revenues.

The table below shows the sector’s Q2 earnings expectations in the context of what was actually reported in the preceding four quarters and what is expected in the following four periods at the medium-industry level.

As you can see in the above chart, the growth pace is expected to accelerate in the back half of the year. 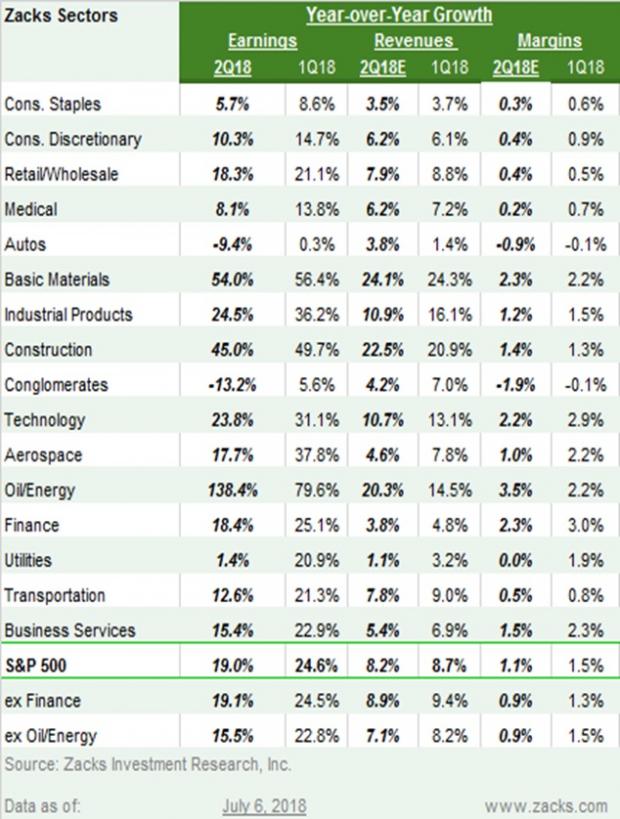 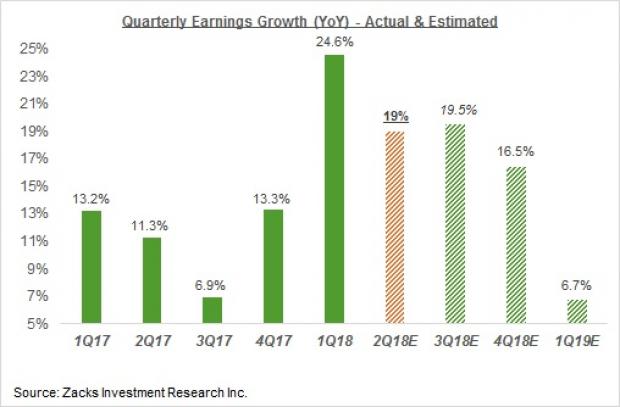 When market commentators talk about earnings growth peak, it is the growth comparison in this chart they are referring to. Looking at this chart, it is obvious that growth has peaked already, with the pace decelerating going forward.

We should keep in mind however that actual results typically come in better than expected, with actuals exceeding estimates in the 3% to 5% range. This means that the 19% growth pace currently expected in Q2 will likely be closer to the 2018 Q1 tally when all is said and done.

The overall level of total earnings is in record territory, as the chart below shows. 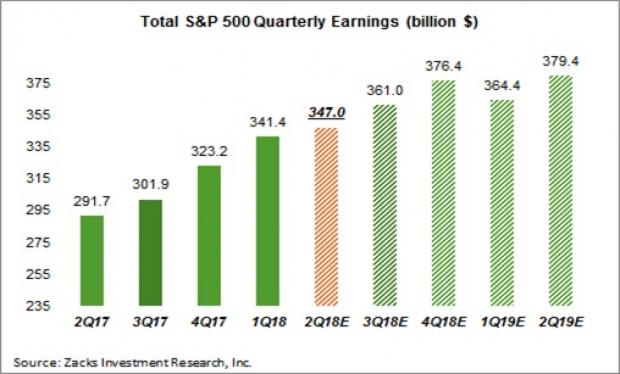 The two charts above provide different answers to the ‘peak earnings’ question. The first chart shows that the growth rate likely peaked in 2018 Q1, while dollar earnings aren’t expected to ‘peak’ till the last quarter of 2018.

We should keep in mind that this earnings cycle got underway back in 2009 when the U.S. economy got out of its last recession. By this time, earnings growth should have come down to the historical ‘normalized’ pace in the mid-single digits level. The reason we have these impressive growth numbers is thanks mostly to the effect of the tax cuts, which will start wearing off towards the end of 2019.

Here is a list of the 22 companies including 7 S&P 500 and reporting this week.