Vodafone Group Plc (VOD - Free Report) recently announced that it has selected Samsung Electronics to supply 5G network equipment in the United Kingdom for an undisclosed amount. With this, the South Korean firm will mark a foray into Europe, which has long been dominated by Nordic telecommunications equipment manufacturers – Ericsson (ERIC - Free Report) and Nokia Corporation (NOK - Free Report) .

Samsung will initially deploy its equipment in 2,500 rural sites in the southwest of England and most of Wales. Notably, Samsung is among several vendors that will mark the first commercial deployment of Open Radio Access Network (Open RAN) in Europe. Based on the concept of interoperability and standardization of RAN elements from different vendors, Open RAN architecture integrates a modular base station software stack on off-the-shelf hardware, enabling baseband and radio unit components from discrete suppliers to operate seamlessly together. It underscores streamlined 5G RAN performance objectives and enables secure and efficient over-the-air firmware upgrades.

With a diverse and open ecosystem, Vodafone aims to develop a more cost-effective, secure, energy efficient and customer-focused network by using components from different suppliers that adhere to a common set of standards. This, in turn, is likely to facilitate the carrier to release new features simultaneously across multiple sites, while adding capacity and resolving outages at a faster pace.

As the 5G ecosystem evolves with increased deployment across the globe, it is likely to offer a plethora of opportunities for diverse industries. The coronavirus outbreak has further highlighted the need for high-speed, high-bandwidth and low-latency connections — the hallmarks of the 5G network — for digital sustainability in the backdrop of social distancing and work-from-home trend.

Amid this backdrop, Ericsson and Nokia have been increasingly gaining prominence at the expense of Huawei Technologies as more and more countries dropped the China-based firm from their 5G vendor list on perceived security risks. Although Samsung is a late entrant into this sphere, it is likely to be a serious contender to the duopoly if other European countries follow the footsteps of the United Kingdom and favor the South Korean firm.

Vodafone is focusing on rolling out superfast 5G technology throughout the United Kingdom. It has inked an agreement with Openreach, the digital networking business unit of BT Group Plc, to extend its broadband coverage in the country. The deal enabled Vodafone to offer its Gigafast Broadband service to three new cities in the United Kingdom, namely Birmingham, Bristol and Liverpool through Openreach’s Fiber-to-the-Premises (FTTP) network.

The FTTP network of Openreach is one of the most extensive broadband networks in the United Kingdom. It is expected to provide Vodafone an unrivalled coverage to promote its services and thereby augment subscriber base.

Riding on such growth drivers, the stock has gained 14.5% over the past year while the industry has declined 5.8%. 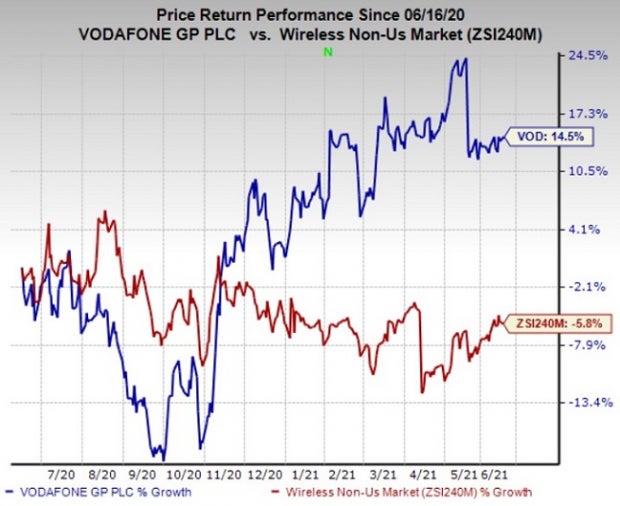 Corning has a long-term earnings growth expectation of 17.7%. It delivered an earnings surprise of 39%, on average, in the trailing four quarters.

Here's Why Intuit's (INTU) Rally is Likely to Continue Further