Disney (DIS - Free Report) might heave a sigh of relief as the company’s theme parks could potentially be back to operating at full capacity by fall. Also, its cruise services are likely to be resumed.

Starting Jun 15, vaccinated guests at Walt Disney World in Florida will not be required to wear face coverings except on Disney transportation like buses and monorails, where masks will still be required.

Disney moved to drop its mandate after nearby theme park Universal Orlando Resort had already dropped its indoor mandate in May, and after Orange County, FL— where Walt Disney World is located — lifted its mask requirements on Jun 5.

Over the past year, global shutdown of theme parks to contain the spread of coronavirus has adversely impacted Disney’s Parks, Experiences & Products segment, which includes its theme parks, resorts and the Disney Cruise Line.

Ease in mandates and protocols might lead to increase in capacity and further reopening of various theme parks and cruises. This is expected to boost Parks, Experiences and Products segment’s top-line growth in the second half of fiscal 2021.

Notably, Disney shares are down 1.6% in the year-to-date period, outperforming the Zacks Media Conglomerates industry’s decline of 24.1% over the same period. 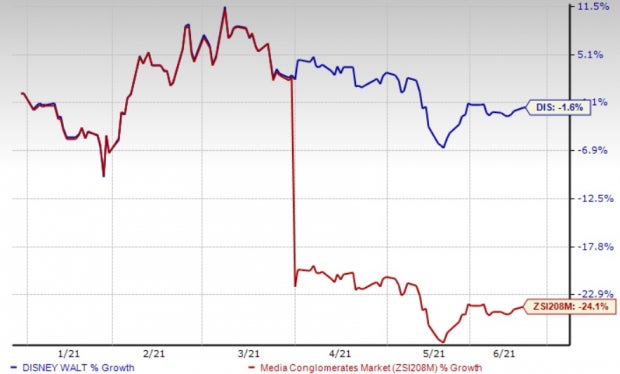 Disney has been analyzing ticket sales and guest patterns to optimize both pricing and experience in an effort to boost demand for its parks and cruise business in the near term.

Disneyland Resort is expected to witness a spike in demand in the second half of 2021. Beginning Jun 15, out-of-state guests will be allowed to visit The Southern California theme park which did not open until Apr 30 and thereafter was only accessible for California residents.

Markedly, Disneyland Resort, Disneyland Paris and the company’s cruise business were closed for through the fiscal second quarter. Hong Kong Disneyland Resort was opened for roughly 30 days during the period. Both Walt Disney World Resort and Shanghai Disney Resort were open throughout the reported quarter.

Disney World is currently gearing up to celebrate its 50th anniversary beginning this October. Each of the four theme parks — Magic Kingdom, EPCOT, Hollywood Studios, and Animal Kingdom — are prepping for the upcoming event, including new decorations, events, and attractions.

The Epcot Theme Park has been undergoing a massive transformation to bring on Remy’s Ratatouille Adventure ride (first premiered in Paris), a new nighttime water show called Harmonious, and the Guardians of the Galaxy: Cosmic Rewind roller coaster.

Moreover, Shanghai Disneyland is working on a Zootopia Land while Tokyo is prepping for a major Disney Sea-themed port expansion including Frozen, Tangled and Peter Pan areas.

Further driving up guest demand for Disneyland is the Jun 4 opening of the Avengers Campus at Disney California Adventure Park. Guests booked tickets to the opening weeks in advance and waited hours to see the new home of Iron Man, Spider-Man, Captain America, and more Marvel super heroes.

Recently, at the Credit Suisse 23rd Annual Communications Conference, the company confirmed that a second private island and three new ships are currently in development for Disney Cruise Line, which have not sailed since March 2020. This includes the new Triton Class Disney Wish cruise ship that will join the Disney Dream, the Disney Fantasy, the Disney Magic, and the Disney Wonder.

Disney’s newest cruise ship, the Disney Wish is scheduled to begin sailing in June 2022. Not only will Captain Minnie lead the brand-new cruise ship but artwork of Minnie Mouse can also be found throughout the Wish ship.

Moreover, Disney Cruise Line will also be launching a limited-time Disney Cruise staycation this fall for those Disney fans who live in the United Kingdom.