Dexcom, Inc. (DXCM - Free Report) recently announced that the Dexcom G6 continuous glucose monitoring (“CGM”) system might now be eligible for provincial coverage in British Columbia, Canada through BC PharmaCare. Diabetics who are on intensive insulin therapy and above the age of two may be entitled to the coverage. Customers will now be able to pick up their Dexcom CGM supplies through a participating local pharmacy as part of the BC PharmaCare coverage program.

It should be noted that patients must meet the coverage criteria, be enrolled in eligible PharmaCare plans and meet any deductible requirements to be eligible for coverage in British Columbia.

With the latest favorable coverage decision, Dexcom is expected to solidify its foothold in the global CGM business.

Significance of the Coverage

The Dexcom G6 CGM System comprises of a small wearable sensor with real-time alerts, including a predictive Urgent Low Soon alert. Thus, the Dexcom G6 can warn the user beforehand about hypoglycemia (lower than normal blood sugar level) during any time of the day.

The coverage expansion is expected to boost accessibility to the CGM technology for diabetes management. It also recognizes the technology’s impact on those who depend on intensive insulin therapy to manage their type 1 and type 2 diabetes. Per management, the improved access to CGM is expected to positively impact all the diabetics’ lives across Canada.

Per a field expert, better access to CGM technology elevates diabetes management for everyone in a patient’s circle of care.

Per a report by Grand View Research, the global CGM device market size was valued at $3,929.7 million in 2019 and is expected to reach $10.4 billion by 2027 at a CAGR of 12.7%. Factors like rising cases of diabetes and increasing adoption of CGM devices are likely to drive the market.

Given the market potential, the latest coverage announcement is expected to provide a significant boost to Dexcom’s business globally.

Of late, Dexcom has witnessed a few notable developments across its business.

The company, during its first-quarter 2021 earnings call in April, reported solid revenue growth in both domestic and international markets. Dexcom also confirmed advancing the clinical and regulatory path for its next-generation G7 CGM system.

The same month, Dexcom received Health Canada authorization for the Dexcom G6 CGM System, which is to be worn on the back of the upper arm by diabetics above the age of 18. Further in the month, the company announced that it is selling the Dexcom G6 CGM system directly throughout the Netherlands after the termination of its distribution collaboration with Zkope Healthcare. 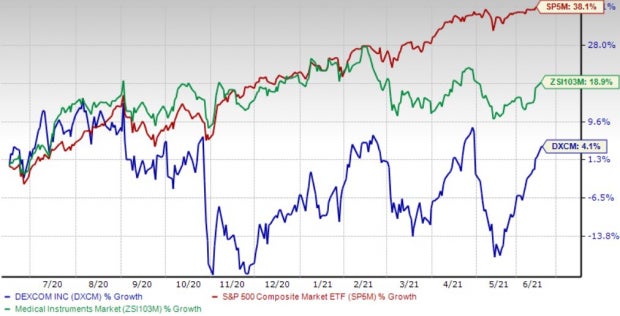