Importantly, the vaccine has an efficacy of 93% against the new variants – predominantly circulating variants of concern (VoC) and variants of interest (VoI). The vaccine was found to be effective against strains of the virus first found in the United Kingdom, United States, Brazil, South Africa and India.

Notably, the PREVENT-19 study enrolled 29,960 participants. The vaccine had an efficacy of 91% in high-risk populations, that is a population above 65 years of age, or under 65 years with comorbidities.

Novavax plans to file for regulatory authorizations for NVX-CoV2373 in the third quarter of 2021.

The results of the U.S. and Mexico studies are almost similar to that of Pfizer and Moderna’s phase III studies and better than that of J&J's. Shares of Pfizer, BioNTech and Moderna declined 1.3%, 7.5% and 5.3%, respectively, on Monday after Novavax’s results were announced. This is because Novavax’s vaccine is likely to provide stiff competition to their jabs, given its high efficacy and mild side-effect profile compared to others.

However, it is important to note that the path to receiving emergency use authorization (“EUA”) for Novavax’s vaccine is quite uncertain, with the FDA announcing in May that it may decline review and process new EUA requests for COVID-19 vaccines through the rest of the pandemic. Novavax might have to seek a full approval for its vaccine, which can be time consuming. Novavax, thus, expects to see strong demand for its vaccine in international markets.

Meanwhile, the PREVENT-19 study is also evaluating NVX-CoV2373 in adolescents from 12 to less than 18 years of age. The study has enrolled 2,248 participants.

Please note that in March 2021, Novavax announced final data from a pivotal phase III study on NVX-CoV2373 in the United Kingdom. Data from the same showed that the vaccine was 96.4% effective against mild, moderate and severe disease caused by the original coronavirus strain in the United Kingdom.

Shares of Novavax have rallied 86.3% so far this year compared with the industry’s increase of 1.1%. 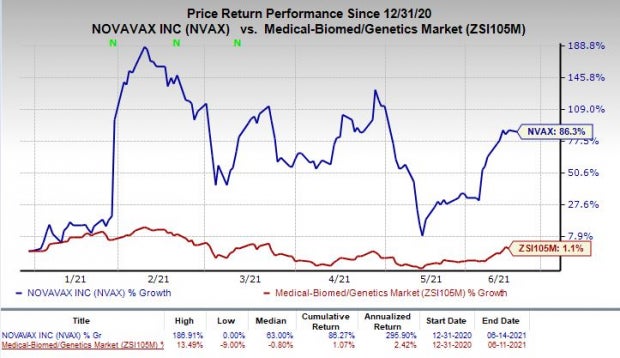 In a separate press release, Novavax announced positive data from the first co-administration study which evaluated NVX-CoV2373 plus an approved influenza vaccine.

Data from the study showed that vaccine efficacy appeared to be preserved in those receiving both vaccines compared to those vaccinated with NVX-CoV2373 alone. Results suggest that simultaneous vaccination may be a viable immunization strategy.

Accenture (ACN) to Benefit From umlaut Buyout: Here's How