In another encouraging development, Brazilian carrier Azul’s (AZUL - Free Report) May traffic improved 12.4% from its April reading as the increased rate of vaccination prompts people to opt for more air travel.

1. With air-travel demand continually improving, especially on the leisure front, JetBlue has been witnessing improved bookings in recent weeks. Notably, the carrier, currently carrying a Zacks Rank #3 (Hold), now anticipates revenues to decline 30-33% in the June quarter of 2021 from the same-period actual in 2019. This is narrower than the previous guided range of a 30-35% decrease. The airline continues to expect flown capacity to decline approximately 15% in the second quarter from second-quarter 2019 actuals.

2. Driven by this better scenario of leisure air travel in both its international and domestic markets, Spirit Airlines expects load factor for the second quarter to be 84%, matching the second-quarter 2019 actuals. Moreover, the second-quarter expectation is much higher than 72.1% reported sequentially.

Owing to brighter revenue scenario, the carrier has witnessed higher operating yields over the past three months. Evidently, Spirit Airlines now expects adjusted EBITDA margin for the June quarter to be positive, albeit moderately (earlier expectation was between -5% and 0% range). The scenario with respect to capacity (measured in available seat miles) is also rosier. The metric is now anticipated to dip 5.2% in second-quarter 2021 from the second-quarter 2019 actuals. Earlier, the company had expected the same to decline 5.5% from the second-quarter 2019 finals. Capacity for the full year is anticipated to inch up 2% from the reported figure of 2019.

3. At Azul, consolidated traffic surged 361.9% year over year in May. In the same time frame, capacity expanded 337.8%. As a result, with traffic surge outweighing capacity expansion, load factor increased 3.9 percentage points. On the domestic front, both traffic and capacity increased 435.5% and 406.7%, respectively, from the year-ago period’s levels. Load factor also inched up 4.2 percentage points to 78.1% in the month. Internationally too, traffic as well as capacity rose 14% and 56.9%, respectively, in the same time frame.

4. Reflecting the uptick in passenger demand in Latin America, Copa Holdings’ (CPA - Free Report) May 2021 traffic decline of 58% from the May 2019 reading represents an improvement from the April traffic decline of 67% (from the comparable period in 2019). This highlights the gradual recovery in air-travel demand. May load factor of 77.6% is also better than April’s figure of 72.8%.

5. In a bid to meet its investment objective in the emerging clean-energy technologies,  United Airlines (UAL - Free Report) announced the formation of a corporate venture fund called United Airlines Ventures. The fund will focus on sustainability concepts that are in line with this Chicago-based airline’s goal of achieving net-zero emissions by 2050 without relying on traditional carbon offsets. The new fund will also concentrate on revolutionary developments in the aerospace field. 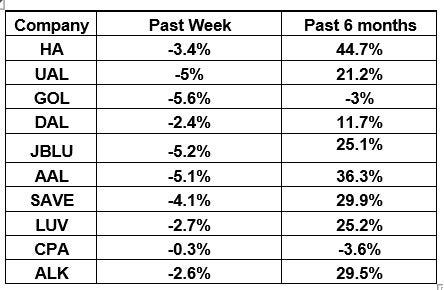 Stay tuned for May traffic reports from the likes of Allegiant Travel Company (ALGT - Free Report) .

Chinese Allies to Pay Petrobras (PBR) $2.94B for Buzios Excess