Axsome Therapeutics, Inc. (AXSM - Free Report) announced that it plans to submit a new drug application (NDA) for its pipeline candidate, AXS-14, in the fourth quarter of 2022. The NDA will seek approval for the candidate as a potential treatment for management of fibromyalgia, a debilitating central nervous system disorder with limited treatment options. The decision was taken by the company following a successful pre-NDA meeting with the FDA. The NDA submission will take place following successful completion of manufacturing and other activities related to the product candidate.

The planned NDA will include data from successfully completed phase III and phase II studies. Data from the late- and mid-stage studies showed that treatment with AXS-14 led to statistically significant improvements compared to placebo in the weekly mean pain score in fibromyalgia patients.

Shares of Axsome have plunged 17.5% so far this year against the industry’s increase of 0.8%. 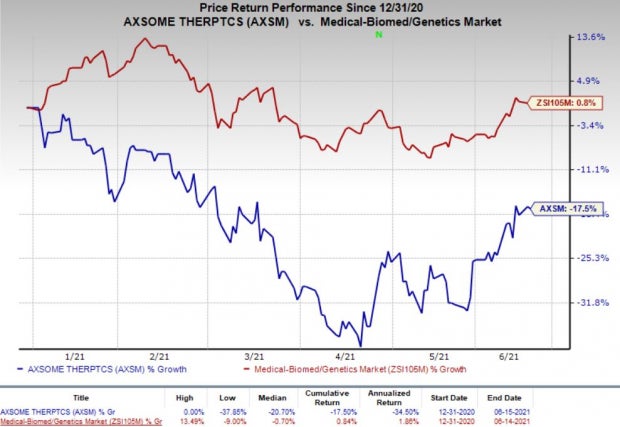 Apart from AXS-14, the company has several other candidates in its pipeline with one candidate under review with the FDA.

An NDA seeking approval for AXS-05 as a potential treatment of major depression disorder is under review with the FDA. A decision is expected by Aug 22, 2021. The company is making preparations to launch AXS-05, following a potential FDA approval. The candidate is being developed for treating treatment-resistant depression, smoking cessation and agitation associated with Alzheimer's disease.

Repligen’s earnings estimates have been revised upward from $1.91 to $2.26 for 2021 over the past 60 days. The company delivered an earnings surprise of 58.14%, on average, in the last four quarters.