Majority of work related to this contract will be carried out in Ridley Park, PA. Per the terms, Boeing will procure long-lead components and parts for the MH-47G Chinook Block II production program.

With more than 950 Chinooks in 20 countries, the program continues to deliver unrivaled production, maintenance and sustainment cost efficiencies.

Of the varied defense equipment that Boeing manufactures, the company’s strength lies in the development of combat-proven aircraft, such as Chinook Block II rotorcraft. Additionally, Boeing has started developing military aerial refueling and strategic transport aircraft for its fixed-wing military aircraft programs.

Being the United States’ largest jet maker and considering the latest developments in the combat aircraft section, Boeing enjoys a smooth flow of contracts for military jets and its associated upgrades. The latest contract win is an example of the same.

Such contract wins are anticipated to fuel this aerospace giant’s growth, driven by the increasing defense spending provisions made by the current U.S. administration.

It is imperative to mention in this context that the fiscal 2022 budget request submitted by President Biden reflects funding request worth $715 billion for the Department of Defense (DoD). This proposal reflects a 1.6% increase from the prior year’s enacted amount. If approved, fresh order flows from the Pentagon will boost growth prospects of Boeing.

Per a report by Mordor Intelligence firm, the global military rotorcraft market is expected to witness a CAGR of 3% during 2020-2025 period. With North America dominating this market, such projections bode well for U.S. rotorcraft-makers like Boeing, Lockheed Martin (LMT - Free Report) and Textron (TXT - Free Report) .

Boeing’s share price has surged 26.1% in the past year compared with the industry’s growth of 14.7%. 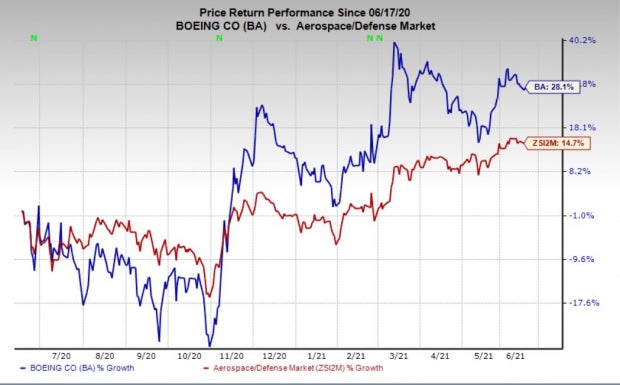 Teledyne delivered an average earnings surprise of 10.53% in the trailing four quarters. The Zacks Consensus Estimate for 2021 earnings has improved 11.1% over the past 60 days.