Eni SPA (E - Free Report) recently agreed to merge the Meleiha and Meleiha Deep concessions in the Western Desert of Egypt. It has signed a deal with the Egyptian General Petroleum Corporation (“EGPC”) and Lukoil, which renamed the combined concessions as Merged Meleiha.

The deal also extended the Merged Meleiha’s concessions to 2036, with possibilities of stretching the time period further to 2041. This is expected to unlock the true potential of the area’s resources. The company is expected to use high-resolution 3D seismic data for development of the prolific basin of the Egyptian Western Desert.

Furthermore, Eni is likely to build a new gas treatment facility and connect it with Western Desert Gas Complex in Alexandria. This is expected to boost Eni’s hold in Egypt’s gas production market. The company has been working in Egypt since 1954. At present, its daily equity output in the country is estimated at 320 thousand barrels of oil equivalent.

Importantly, Eni intends to use experienced local contractors at the site, who also worked in the Zohr gas field. A joint venture between Eni and EGPC will be the operator at the concession, with a 76% stake. Russian energy company Lukoil owns the remaining 24% interest.

Eni’s constant efforts to expand upstream operations will go a long way in generating growth. The company has recorded massive production growth in the past few years, thanks to ramped-up production from Egypt’s Zohr and Noroos gas fields. Moreover, the start-up of key upstream projects is expected to enable it to achieve a compound annual growth rate of 4% from 2021 through 2024.

Eni’s shares have increased 30% in the past year compared with 28.6% rise of the industry. 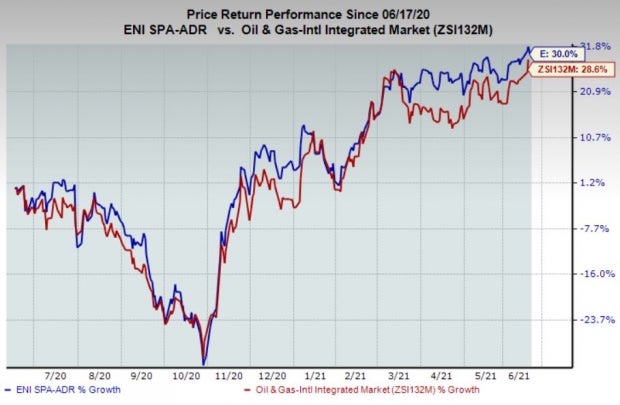