U.S. telecom stocks witnessed a steady downtrend for the most part of the past five trading days, largely driven by uncertainty regarding the continued chip shortage and supply chain disruptions extending beyond semiconductors. This, in turn, has led to acute demand-supply imbalance, as the industry faces essential fiber materials and labor shortage, shipping delays and shortages of containers and other raw materials, affecting the expansion and rollout of new broadband networks. Extended lead times for basic components have crippled operations and impacted the delivery schedule, prompting several industry groups to urge the government to take immediate corrective actions.

The observations were part of the collective response from a range of industry stakeholders after the FCC sought suggestions from various industry groups last month to deter a similar crisis in the telecom sector that have shrouded the automobile business owing to a shortage in the supply of chips. These building blocks form a critical element in essential telecommunication equipment as well as in the broadband and cable industry. The report pointed out that a dearth of raw material supply has affected production of nearly every element of the communications sector, ranging from infrastructure products such as routers, switches and base stations to the user terminal side such as laptops, desktops and mobile phones. This has severely affected the operations of relatively small network operators and rural carriers, inducing some industry trade groups to seek government intervention to ensure the supply of critical communications gears.

Meanwhile, the Biden administration is ratcheting up pressure on China with FCC giving the final touches to a plan to ban telecommunications products from Huawei and four other communist-nation based firms, including surveillance cameras widely used by American schools. The FCC is also likely to revoke its earlier authorization for the use of such equipment on perceived security threats, forcing most schools and local government facilities to replace them. The Congress is further mulling to introduce a bill to prohibit FCC from reviewing or issuing new equipment licenses to companies on the agency’s blacklist, providing an added security layer to foil alleged data intrusion efforts by China-based firms.

1.     Verizon Communications Inc. (VZ - Free Report) has offered the best of LTE and 5G Ultrawideband facilities with the launch of On Site 5G — a transformative on-premises, private 5G network — for business enterprises. This customized solution enables firms that were hitherto crippled with coverage gaps, lost connectivity, fractured security, data congestion and inconsistent service quality to have a dedicated capacity with adequate bandwidth to minimize costly downtime and missed opportunities.

Leveraging AI capabilities and ML techniques for real-time analytics, On Site 5G offers improved network competences for a dynamic all-in-one solution and a consistent, predictable performance that accelerates digital transformation. This, in turn, enables business enterprises to better adapt to the evolving hybrid workforce requirements and embrace the “new normal.” It is interoperable with most existing IT and IoT infrastructure and can support several connected devices, and can be even based on multiple spectrum scenarios.

Per the deal, AccessOn will leverage Ciena’s Routing and Switching portfolio to offer high-speed 100GbE links at key network locations. Powered by WaveLogic coherent optics, the 6500 Packet Optical platform offers a robust infrastructure that is highly scalable and cost-effective for a rural set up. This will facilitate the carrier to better address the evolving customer demand across a single, converged packet-based transport network. This, in turn, will enable AccessOn to enhance real-time visibility and proactively take steps to address any potential issue while extending its rural footprint.

The C-Band spectrum provides a proper balance of network coverage and capacity, and allows fast 5G rollout with the introduction of services. It will support AT&T in extending its 5G services across the United States. The company aims to cover 200 million people with C-Band by the end of 2023.

4.    Vodafone Group Plc (VOD - Free Report) recently announced that it has selected Samsung Electronics to supply 5G network equipment in the United Kingdom for an undisclosed amount. With this, the South Korean firm will make its foray into Europe, which has long been dominated by Nordic telecommunications equipment manufacturers — Ericsson and Nokia.

Samsung will initially deploy its equipment in 2,500 rural sites in the southwest of England and most of Wales. Notably, Samsung is among several vendors that will mark the first commercial deployment of Open Radio Access Network in Europe.

5.     With a record of delivering reliable communications in the Arctic region for more than 20 years, Iridium Communications Inc. (IRDM - Free Report) has unveiled Operation Arctic Lynx. This two-plus week period expedition, which commenced from Jun 11, is primarily focused on demonstrating the on-field feasibility of Iridium Connected weather resilient satellite communications technology in the polar regions.

This series of partnership-driven field exercises mainly focuses on accelerating the deployment of such avant-garde technologies at locations between 60- and 82-degrees north latitude. Markedly, this ambitious project involves the participation of more than 20 esteemed organizations. These include U.S. federal agencies, Canadian government organizations, scientific research organizations and U.S. Department of Defense, to name a few. 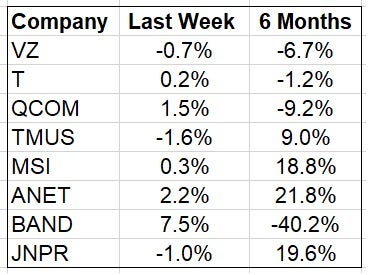 In the past five trading days, Bandwidth has been the best performer with its stock gaining 7.5%, while T-Mobile declined the most with its stock falling 1.6%.

Over the past six months, Arista has been the best performer with its stock appreciating 21.8%, while Bandwidth declined the most with its stock falling 40.2%.

Over the past six months, the Zacks Telecommunications Services industry has gained 11.1% while the S&P 500 has rallied 14.2%. 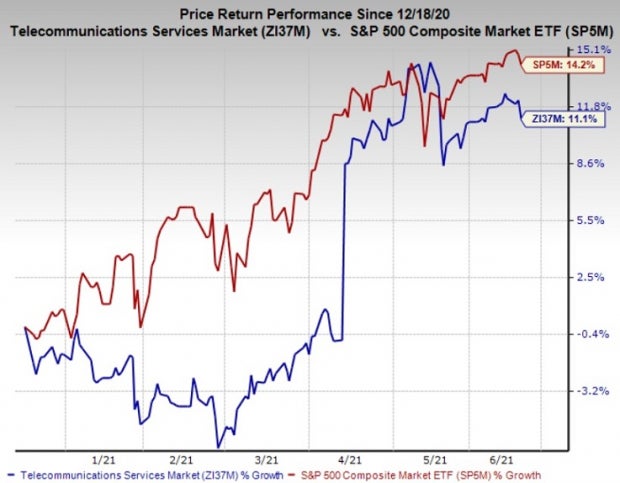