Per the agreement, Lockheed Martin’s RMS unit will provide the required inertial navigation systems and associated inertial spares for the Ohio and Columbia ballistic missile submarine shallow-water submersible platforms. Majority of the work related to the deal will be performed in Heath, OH. The contract is expected to get completed by Feb 28, 2028.

The Trident II D5 is the latest generation of the U.S. Navy's submarine-launched fleet ballistic missiles, following the highly successful Polaris, Poseidon and Trident I C4 programs. It is currently aboard OHIO-class and British VANGUARD-class submarines. The Trident is equipped with multiple independently targetable reentry vehicles, armed with thermonuclear warheads and launched from nuclear-powered ballistic missile submarines.

A Trident II D5 missile is capable of reaching more than 4,000 miles at hypersonic speeds and then delivering multiple warheads with high accuracy against widely separated targets. Moreover, these missiles comprising the sea-based deterrent can’t be tracked or targeted when they are operating, making it one of the most lethal and critical weapon systems in the U.S. Navy's arsenal.

Cross-border conflicts between nations along with spurring intra-state disputes have resulted in civil wars like the one going on in the Middle East. Therefore, the boom in the missile defense market is expected to continue over the next few years. Anticipating the continuation of this trend, the missile and missile defense systems market is estimated to see a CAGR of more than 10% during the 2020-2025 period, as predicted by Mordor Intelligence.

Shares of Lockheed Martin, a Zacks Rank #3 (Hold) company, have gained 7% in the past three months compared with the industry’s growth of 3.7%. You can see the complete list of today’s Zacks #1 Rank (Strong Buy) stocks here. 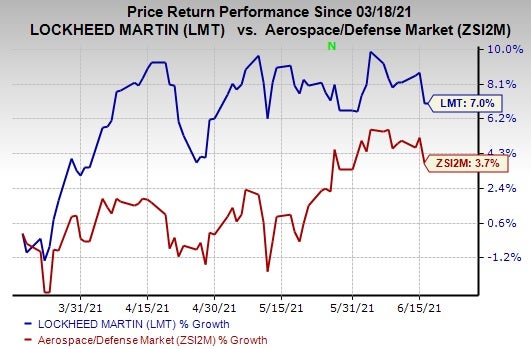