Coca-Cola (KO) Stock Slips on Ronaldo's Act: Will It Bounce Back?

Shares of The Coca-Cola Company (KO - Free Report) recently lost momentum, following the news about the soccer superstar, Cristiano Ronaldo, removing bottles of the carbonated drink from the table before the press conference at the Euro 2020. After moving the Coke bottles, Ronaldo held a bottle of water high to encourage people to drink water instead. The Portugal captain is known for being a health enthusiast.

However, the soccer star’s action had a greater implication on Coca-Cola’s market value, which lost approximately $4 billion following the press conference. The news sent shares of Coca-Cola down by 1.6% soon after the conference. Meanwhile, the stock closed down 1.3% yesterday. Notably, Coca-Cola is one of the official sponsors of the Euro 2020.

A spokesperson at the Euro 2020 responded to Ronaldo’s action, stating that players are offered water as well as Coca-Cola and Coca-Cola Zero Sugar at the press conference. However, everyone is entitled to their choice of drink.

In April, Coca-Cola noted that its global ready-to-drink market share started to improve due to the reopening of restaurants and movie theaters in major markets, including the United States and Europe. This is well reflected in the company’s significant share price growth, which has risen 13.5% since February. Overall, shares of Coca-Cola have increased 8.1% in the past three months compared with the industry’s growth of 6.8%. 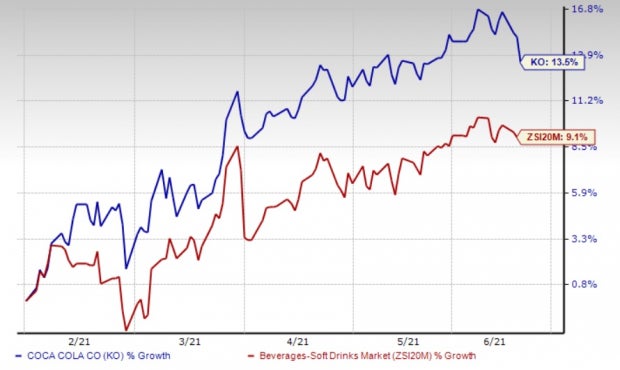 In its last reported quarter’s earnings conference call, management stated that the volume trends in March 2021 marked the return to the pre-pandemic levels of March 2019, largely driven by strength in the Asia Pacific. Volume gains were driven by its trademark Coca-Cola, sparkling flavors, and the nutrition, juice, dairy and plant-based beverage categories. The sparkling soft drinks’ unit case volume improved 4% in first-quarter 2021, with Coca-Cola Zero Sugar improving 8%. Volume for nutrition, juice, dairy and plant-based beverages was up 3%.

Additionally, Coca-Cola has been witnessing a splurge in e-commerce, with the growth rate of the channel doubling in many countries. The company has been accelerating investments to expand presence in this channel from the pre-crisis levels. It has been digitizing the enterprise for several years but has accelerated the evolution into an organization that efficiently executes marketing, commercial, sales and distribution, both offline and online.

The company is strengthening consumer connections and further piloting numerous different digital-enabled initiatives through fulfillment methods (be it B2B to home or B2C platforms in many countries) to capture online demand for at-home consumption. For example, it continues to add outlets and expand its myCoke B2B platform to new markets. Also, the online-to-offline (O2O) partnerships with multiple food aggregators ensure beverage availability and visibility. The company’s focus on accelerating expansion in the digital channel is likely to be sustainable, positioning it for long-term growth.

The Boston Beer Company, Inc. (SAM - Free Report) has delivered a trailing four-quarter earnings surprise of 51.5%, on average. It currently has a Zacks Rank #2 (Buy). You can see the complete list of today’s Zacks #1 Rank (Strong Buy) stocks here.

Chewy Inc. (CHWY - Free Report) has a long-term earnings growth rate of 20%. It currently has a Zacks Rank #2.