Are Investors Missing Opportunities in These 5 Buy-Ranked Stocks?

The meme stock frenzy has led to a lot of trading that seems irrational from the fundamentals standpoint. So some people have been pulling some money out of slower moving stocks to invest in riskier names that might offer strong growth. Although this sounds like gambling, some people have made fortunes.

And then, there has been a fair amount of profit taking, that have also kept the lid on prices.

Today, I’ve zeroed in on some stocks that have seen recent weakness for seemingly irrational reasons.

The first on my list is Hibbett Sports, Inc. (HIBB - Free Report) , which sells footwear, athletic equipment and apparel in small and mid-sized markets in the South, Southwest, Mid-Atlantic and Midwest U.S.

A look at its historical performance shows that the last 5 years’ revenue growth has been relatively steady with some acceleration after the pandemic hit, both last year, as people focused on exercising at home and this year, as they prepared for the reopening. This strength along with cost management has allowed the company to generate some strong earnings growth in recent quarters.

Since there’s only one analyst providing estimates on this stock, there isn’t much of a consensus. However, the surprise history from the March 2019 quarter indicates that estimates are generally conservative. So other than the first two quarters of 2020 when results were impacted by the pandemic, Hibbett has topped estimates in every quarter.

And in the last 30 days, the analyst has taken the 2022 (ending January) earnings estimate up 70%. The 2023 estimate was raised by 27%. This is an obvious indication that results are improving.

However, this Zacks #1 (Strong Buy) stock is down 11.7% over the past week with no negative news flow. Its forward P/E of 9.27X trails the P/E of 18.61X of the Retail-Miscellaneous/Diversified industry (to which it belongs) and is also below its own median level over the past year.

Investors do seem to be passing up an opportunity here.

The next stock on my list is the Shanghai-based Chinese personal finance software provider Jiayin Group Inc. (JFIN - Free Report) .

The available data from the March 2019 quarter shows a downward spiral in revenue right up to the pandemic and through the first two quarters of last year, which appear to have been impacted by the pandemic. There was a nice rebound thereafter in the September quarter. But the trend didn’t last. It was only because of cost efficiencies that the company managed continued earnings growth in the last quarter.

So let’s see what the estimates say. Here again, there is just one analyst providing estimates. The surprise history (from September 2019) shows that after the initial two quarters, the company has topped estimates in every quarter for which an estimate was available by substantial margins. This seems to indicate that estimates have tended towards the conservative.

Moreover, after losing 21.2% of its value over the past week, the Zacks Rank #2 (Buy) stock trades at just 4.95X forward earnings, which is below its median level of 4.69X over the past year and is virtually incomparable with the 406.54X average for the Internet Software industry, to which it belongs.

So the main thing that can be said for this stock is that it’s really cheap. While revenue growth appears to be improving, a solid trend is not identifiable. So there are risks to investing in this one.

Third on my list is Zacks #1 ranked OneWater Marine Inc. (ONEW - Free Report) , which sells both new and pre-owned recreational boats in the premium segment, as well as the related parts, accessories, finance, insurance, maintenance & repair and ancillary services.

The company relies on acquisitions to expand its product line, consolidate its position in its industry and generate growth. Within the past few days, it has announced a small acquisition and a special dividend of $1.80 a share, payable to Class A shareholders as on Jun 28, 2021.

Its revenue has been growing steadily over the last two years and earnings are also growing strongly from year-ago periods.

The surprise history is overwhelmingly positive, with the last four quarters’ surprise averaging 224.1%.

The estimate revision trend is also positive and with 3 estimates in the consensus, it is relatively more reliable. The Zacks Consensus earnings estimate for the year ending September 2021 is up 8% in the last 30 days. The 2022 estimate is up around 6%.

Despite the positives, the shares have lost 12.8% of their value over the past week. They currently trade at 6.70X forward earnings, which is below their median level of 8.34X over the past year and way below the 28.00X of the Leisure & Recreation Products industry, to which it belongs.

This one definitely looks like an opportunity going begging.

Party City Holdco Inc. (PRTY - Free Report) is a relatively mature player in the Consumer Products – Discretionary industry. It designs, manufactures, contracts for manufacture and distributes party goods, including paper and plastic tableware, metallic and latex balloons, Halloween and other costumes, accessories, novelties, gifts and stationery. It also has specialty retail party supply stores primarily in the U.S. and Canada.

The Zacks Rank #2 company’s performance over the last 5 years includes very low growth between 2015 and 2018, followed by a declining trend thereafter. Although it is jumping back from the pandemic lows, I see no trend reversal yet. The EPS trajectory looks equally disappointing.

So the past week’s 11.2% decline in value seems inexplicable.

The hit to revenue during the pandemic makes P/E an inadequate measure of its valuation. On a price-to-sales basis, the shares are trading at a 0.50X multiple, above their own median level over the past year (which is understandable given the impact of the pandemic). However, they are also trading well below the industry average of 7.28X.

Although the company could see stronger sales this year given the possibility of more get-togethers (in fact a pent-up desire for them), the long-term value isn’t apparent.

And finally, we have Zacks #1 ranked REV Group, Inc. (REVG - Free Report) . The company, which operates in the Transportation – Services industry, sells three kinds of vehicles.

The revenue growth trend in the last five years (barring 2020, which was pandemic-impacted) has been good. The company has also jumped out of the pandemic lows. The earnings growth trend also looks encouraging, with help from cost containment.

The company also has an active M&A program, under which it has made some important acquisitions. As a result, it took on a substantial amount of debt in 2019 that it continues to pay down.  However, debt levels are manageable and can’t be considered a risk to investment in the shares.

So it’s something of a surprise that the shares lost 18.3% of their value over the past week.

REVG shares are trading at 10.98X earnings and 0.39X sales. On an absolute basis, both these multiples are quite low. They are also low with respect to the industry, which averages 21.34X and 2.25X, respectively. 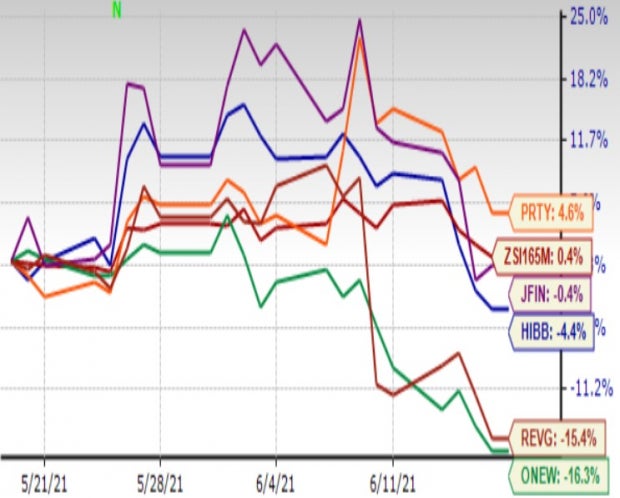 5 Stocks to Buy on the Dip Despite Recent Market Meltdown