JAKKS Pacific, Inc. (JAKK - Free Report) recently announced a multi-year, North America contract extension with BLACK+DECKER. However, the financial terms of the deal have been kept under wraps. Notably, both the companies have been in a partnership for more than 16 years.

Per the deal, the company will continue to design, manufacture, market, and sell Black+Decker toy work benches, tool sets, tools, housewares, and kitchen products in the United States, Canada and Mexico.

Craig Drobis, SVP of Marketing at JAKKS Pacific said, “During quarantine we’ve seen an even greater focus on and success of basic roleplay toys. Our BLACK+DECKER line has been no exception.” 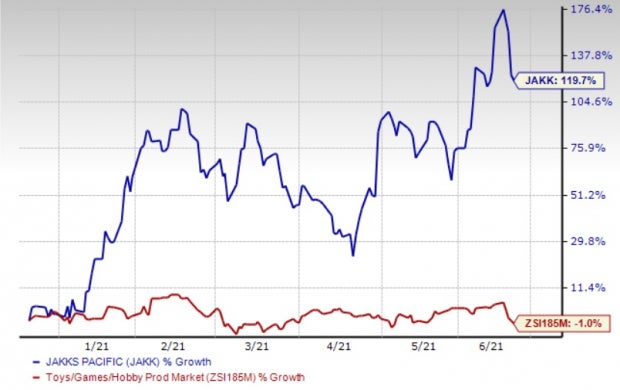 Shares of the company have gained 119.7% in the past six months, against the industry’s decline of 1%.

JAKKS Pacific is committed toward diversifying its footprint outside the United States. Consistent with its endeavors, the company has opened sales offices and expanded distribution agreements for its products. Its partnership with Meisheng is expected to result in robust growth in Asia. Meanwhile, after launching Tsum Tsum in the key international markets like Latin America and Asia, the company plans to expand its distribution in new territories in the days ahead.

The expansion initiatives are likely to strengthen its international presence and customer base. The initiatives are also expected to boost sales and profit margins, and enable the company to attract licenses. During the third quarter, the company made significant progress with respect to direct distribution in Italy, Spain, and Mexico. Moreover, it stated that the benefits of the same are likely to get reflected in 2021.