Per major media sources, The Boeing Company (BA - Free Report) has recently completed the first flight of its 737-10 aircraft, which is the largest airplane in its 737 MAX jet family. The first flight was pivotal for the company in testing the airplane’s systems, flight controls and handling qualities. Going ahead, Boeing will work closely with regulators to certify the airplane prior to its scheduled entry into service in 2023.

How Will This Boost Boeing’s Prospects?

As the 737 Max is now certified safe for flying again, airliners and aircraft operators across the world have steadily started to rely on the aircraft again, as it burns lesser fuel and has a lower cost of maintenance. Evidently, so far in 2021, Boeing has witnessed quite an impressive response for its 737 aircraft, which was inconceivable a year back.

Interestingly, Boeing ended May 2021 on a brighter note with 34 737 MAX orders coming from Southwest Airlines (LUV - Free Report) . Earlier, in March, United Airlines (UAL - Free Report) ordered 25 new 737 Max jets. Such a growing number of orders for its 737 Max might help Boeing gradually reduce its inventory and boost its balance sheet in the coming days.

Now, post the maiden flight for 737-10, we may expect incoming order flows for this aircraft, which in turn will boost the performance of Boeing’s commercial aerospace segment that has been struggling significantly over the past couple of years.

Challenges That Lie Ahead

As Boeing's 737 MAX version of aircraft remained grounded for nearly two years following two fatal crashes, along with many other technical impairments and scrutiny from regulators, the company is likely to go through rigorous testing and stringent regulatory procedures in order to complete safety certification of the 737 Max 10. This might turn out to be a very costly affair and also time-consuming for the company.

Furthermore, from the viewpoint of market competitiveness, Boeing seems to be in a tough spot compared to its arch-rival, Airbus (EADSY - Free Report) . Notably, the 737 Max 10 jet’s range is about 3,300 nautical miles, which falls quite short of the Airbus’ A321neo, roughly having a range of 4,000 nm. Moreover, the A321neo has a maximum capacity of 240 passengers, which trumps the 737 MAX 10’s capacity of 230. Notably, airline company’s looking for a 200 plus capacity narrow-body aircraft will likely be inclined toward the Airbus A321neo, as it is also a cheaper alternative in list prices compared to the 737 MAX 10.

Nevertheless, Boeing is working on the safety enhancements for the 737 Max 10, especially for its air data indication system and the addition of a third cockpit indication requested by European regulators of the “angle of attack,” a parameter needed to avoid stalling or losing lift (as stated by a CNBC report). Once completed, such enhancements might boost demand for this jetliner in the days ahead.

Shares of Boeing, a Zacks Rank #3 (Hold) company, have gained 25.9% in the past year compared with the industry’s growth of 14%. You can see the complete list of today’s Zacks #1 Rank (Strong Buy) stocks here. 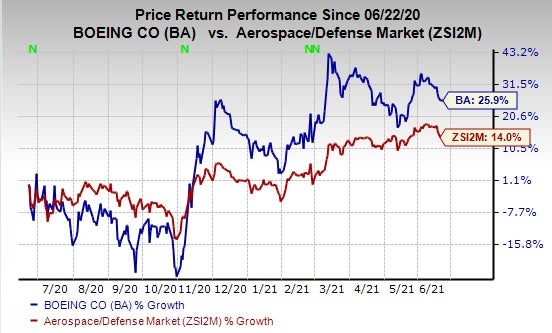