Burlington Stores, Inc. (BURL - Free Report) looks promising on the back of its robust business model, successful execution of Burlington 2.0 strategy and store-expansion endeavors. The company is smoothly progressing on its Burlington 2.0 initiative, which aims at improving the execution of the off-price model. Impressively, these factors are consistently fueling this currently Zacks Rank #1 (Strong Buy) stock, which have surged 47.3% in the past year, surpassing the industry’s 33.5% rally. You can see the complete list of today’s Zacks #1 Rank stocks here.

Additionally, analysts look quite optimistic about the stock, apparently from the company’s higher earnings estimate revisions. The Zacks Consensus Estimate earnings for fiscal 2021 stands at $8.54 while the same for fiscal 2022 is pegged at $10.10, reflecting growth of 17.5% and 5.4%, respectively, over the past 30 days. Also, the consensus mark for second-quarter fiscal 2021 earnings of $1.27 has moved 9.5% north in the same time period. Also, a Growth Score of A highlights the company’s potential.

Speaking of the Burlington 2.0 initiative, this plan is significantly contributing to the company’s overall performance. Via this strategy, the company focuses on three aspects, namely marketing, merchandising and store prototype. The company’s marketing program is expected to leverage the marketing reach and expenditure in the upcoming years. With respect to merchandising, management expects investment in the merchandising capabilities to better execute the off-price model and boost growth.

Now talking of its store-growth plans, we note that management remains committed toward store expansion including the latest store prototypes. Management had earlier raised its long-term store target to 2,000 stores from 1,000, given the smaller store format enabled by the Burlington 2.0 strategy. Moving on, it expects to launch nine net outlets in the fiscal second quarter and 43 net stores in the second half of fiscal 2021. Additionally, the company is encouraged by a 25,000-square foot store prototype. Over time, this smaller prototype is likely to represent majority of the company’s new store openings. Via this smaller prototype, it aims to operate with leaner in-store inventory levels. 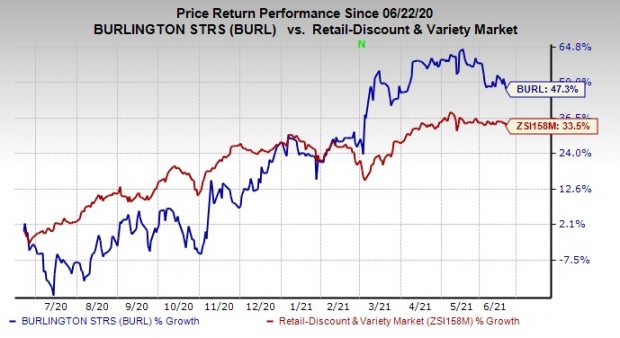 Furthermore, the retailer made multiple changes to its business model to adapt to the ongoing changes in the industry. Over the years, the company also increased vendor counts, made technological advancements, initiated better marketing approach and focused on localized assortments.

Markedly, Burlington Stores reported a sturdy first-quarter fiscal 2021 performance wherein both the top and the bottom line surpassed the Zacks Consensus Estimate as well as improved from the last fiscal year and from the first quarter of fiscal 2019 too. In the reported quarter, comparable-store sales (comps) grew 20% from the first-quarter fiscal 2019 level. Gains from the latest round of stimulus checks, the accelerated pace of the vaccine rollout, pent-up consumer demand and a solid execution fueled comps. Also, the company experienced broad-based strength with respect to category and regional performance. All of the company’s key merchandise categories outperformed projections and comps across the entire regions of the country

As a result, management raised its internal baseline comp sales guidance to a positive 10% for the fiscal second quarter. It also stated that if the comp trend surpasses that 10% mark in the fiscal second quarter, it will have the ability to chase a higher sales trend. Moreover, growth in new store and non-comp sales along with the comp baseline assumption of 7% will lead to about 20% sales growth for fiscal 2021.

Target (TGT - Free Report) has a long-term earnings growth rate of 13.3% and a Zacks Rank #1, currently.

Dollar General (DG - Free Report) has a long-term earnings growth rate of 11.3% and a Zacks Rank #2 (Buy) at present.