In the past week, JetBlue Airways Corporation (JBLU - Free Report) launched additional flights, in line with its objective to rebuild international demand. The move was in response to the recovery in air-travel demand (especially for leisure) as more and more people get immunization shots everyday.

Delta Air Lines (DAL - Free Report) was also in news owing to efforts to restore its international network. In sync with this purpose, the carrier intends to resume flights to South Africa shortly. An expansion update was also available from Alaska Airlines, the wholly owned subsidiary of Alaska Air Group (ALK - Free Report) in response to the demand uptick. Allegiant Travel Company (ALGT - Free Report) too grabbed headlines in the past week, courtesy of its impressive traffic report for May as more and more people take to the skies.

2. Delta intends to resume services (thrice a week) between Atlanta and Johannesburg on Aug 1. The carrier will ply Airbus A350-900 jets to operate flights on this route. In fact, Delta’s decision to resume operations to South Africa implies that flights to all the African markets that the carrier had served prior to the pandemic will be restored. Notably, the airline currently operates nearly 20 flights to its African markets per week.

3. Southwest Airlines (LUV - Free Report) had to cancel or delay multiple flights in the past week due to technical issues. The flight cancellations and delays during the presumably busy summer travel period might hurt the company’s bookings, which had been seeing a steady rise lately on the back of improved leisure travel demand.

4. At Allegiant, scheduled traffic (measured in revenue passenger miles) surged 172% from May 2020 levels. Capacity (measured in available seat miles) for scheduled service increased 87.3% from the May 2020 reading. With the traffic surge outweighing capacity expansion, load factor (% of seats filled by passengers) in the month expanded 21.4 points to 68.7% from the year-ago period. For the total system (including scheduled service and fixed fee contract), Allegiant carried more passengers in May 2021, up 186.4% year over year.

The following table shows the price movement of the major airline players over the past week and during the past 6 months. 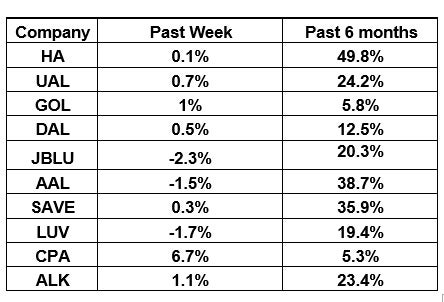 Stay tuned for the usual news updates on the space.