What Should You Do With the Meme Stock ContextLogic (WISH)?

The meme mania that started this year continues unabated with one stock or the other grabbing investors’ attention who are active on the social-media platform.

Meme stocks attract retail investors on the basis on their short-interest position. A big open short position prompts investors to buy the stock and squeeze shortsellers. For the newbies, in a short position, the stock is borrowed and sold with the expectation that the price will decline. Shorting in huge volumes is generally done by hedge funds. When the retail investor starts buying the stock, it leads to price appreciation. Hedge funds also start buying them to reduce their losses as they have to cover up their open sell position. This results in an upward spiral in share price.

While this meme craze can cause share price volatility in the short run and benefit traders, for a long-term investor, this noise should, however, not cause any distraction. Serious investors should look for the stock’s fundamentals rather than play with short-interest positions.

One of the favourite meme stocks that is trending now is ContextLogic Inc. (WISH - Free Report) , an e-commerce player. So far this month, the stock has soared 74%. 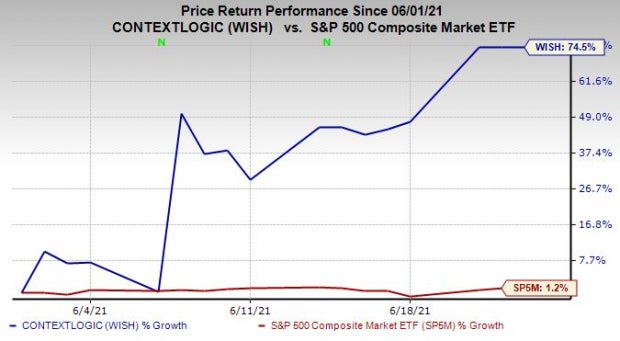 The company came out with an Initial Public Offering (IPO) in December 2020 and since then until May 2021 end, its stock declined 60%.

The company was founded in 2010 and is an online marketplace for discounted products. It mainly targets low-to middle-income consumers and keeps the price tag low as its main supplies come from China. It currently has 550000 merchants and more than 100 million monthly active users (MAUs).

What attracts most customers to the company’s online platform is its user-friendly quality along with easy accessibility on mobile phones. Also, its personalized browsing goes well with the customers.

Is ContextLogic Worth All the Surge?

The company has its set of headwinds. Let’s glance through the same here.

Decline in Users: MAUs (the number of users that visited the Wish platform either on its mobile app, mobile web or on a desktop) decreased approximately 7% in the quarter ended Mar 31, 2021. This decline was due to logistical challenges prevalent in some of the markets in Europe and North America. Therefore, the company de-emphasized user acquisition in these areas. While it is focusing on higher lifetime value  (LTV) users in many of the more developed markets, we remain on the sidelines till the numbers show evidence of growth in user.

Loss-Making Operations:  In the first quarter of 2021, adjusted EBITDA worsened to a loss of $79 million from a loss of $51 million in the year-ago quarter. Gross margin also contracted to 57% in the most recently reported quarter from 65% in the last reported quarter. This downside is due to higher mix of business coming from logistics, which carries lower margins than the business of Marketplace. Logistic revenues are derived from services offered to merchants for direct end-to-end single order shipment from its location to the user. Marketplace revenues include commission fees collected in connection with user purchases of the merchants’ products and carries higher margins than the other business. Thus the company will have to ramp up its Marketplace business to improve its margins.

Cash Burn: The company’s free cash flow from operations was a negative $354 million in the quarter ended Mar 31, 2021, deteriorating from a negative $129 million at the end of Mar 31, 2020. Even though the company carries no debt, which is a positive, it is exhausting cash.

What Should You Do?

Though ContextLogic is a fledgling company but it faces competition with other well-established and stable players like Amazon, ebay, Walmart, Target, et al. Also, the company’s reliance on China as the biggest supplier of goods poses a risk. In addition, it gets its customer traffic from Facebook and Google. Hence, in the wake of any conflict with these companies can impact the customer flow of the company adversely.

Considering the current noise around the stock, it’s sensible to stay away from it right now.

The stock carries a Zacks Rank #4 (Sell) at present.