Lockheed Martin Corp.’s (LMT - Free Report) business unit, Sikorsky, recently secured a modification contract to provide repair and maintenance support for the CH-53K helicopter. Work related to the deal is expected to be completed by December 2026.

Per the deal terms, Sikorsky will provide 362 spare parts and support required for the repair and maintenance of the CH-53K low-rate initial production configuration aircraft.

Valued at $73.2 million, the contract has been awarded by the Naval Air Systems Command, Patuxent River, MD. Majority of the work related to the deal will be carried out in Stratford, CT.

The CH-53K helicopter takes forward Sikorsky’s 50 years of manufacturing and operational success with its CH-53A, CH-53D/G and CH-53E predecessors. The new heavy lifter allows the U.S. Marine Corps and international militaries to move troops and equipment from ship to shore, and to higher altitude terrains more quickly and effectively. It is also effective for handling missions like humanitarian aid, troop transport, casualty evacuation, support of special operation forces, and combat search and rescue (CSAR).

In February 2021, Israel made a decision to purchase Lockheed Martin’s CH-53K helicopter over Boeing's (BA - Free Report) CH-47, in a step to further build on the Israel Defense Force’s capabilities. Such a strategic move by Israel could be pivotal for Lockheed Martin’s growth in the trouble-ridden Middle East area over its top competitors.

Lockheed Martin’s Sikorsky unit provides military and rotary-wing aircraft to all five branches of the U.S. armed forces, along with military services and commercial operators in 40 nations. Hence, this unit serves as a major revenue-generating division for this defense contractor.

In recent times, increasing geopolitical tensions across the world have prompted both developed and developing nations to effectively increase their defense budget. It is imperative to mention in this context that the fiscal 2022 defense budget proposal reflects funding worth $753 billion for the U.S. defense programs, implying an annual increase of 1.7%. Interestingly, as part of this proposal, a sum of $1.7 billion has specifically been allotted to procure 9 Sikorsky 's CH-53K King Stallion Helicopters. If approved, orders for CH-53K King Stallion’s wide variety of military products would likely increase, thereby boosting Lockheed Martin’s growth prospects.

Will Other Helicopter Makers Benefit?

Substantial fleet modernization plans of the militaries deploying new and advanced attack helicopters are anticipated to support the growth of the combat helicopter market. Such projections bode well for other helicopter-makers alongside Lockheed Martin, such as Airbus SE (EADSY - Free Report) , Boeing and Textron (TXT - Free Report) .

Shares of Lockheed Martin, a Zacks Rank #3 (Hold) company, have gained 7.4% in the past three months compared with the industry’s growth of 7.1%. You can see the complete list of today’s Zacks #1 Rank (Strong Buy) stocks here. 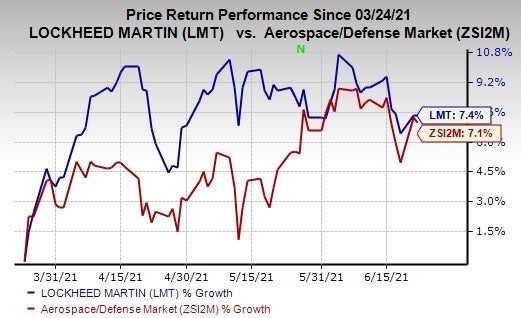