Evergy Inc. (EVRG - Free Report) , along with its subsidiaries, is engaged in generation, transmission, distribution and sale of electricity to more than 1.6 million customers. Regular investment for strengthening its generation portfolio and infrastructure enables it to efficiently serve customers.

This Zacks Rank #3 (Hold) stock delivered an average surprise of 14.8% in the past four quarters. You can see the complete list of today’s Zacks #1 Rank (Strong Buy) stocks here.

Evergy plans to invest $9.2 billion in the 2021-2025 time period, which will have a positive impact on its overall performance and earnings. Out of the planned expenditure, $5.9 billion will be invested toward upgrades to transmission and distribution infrastructure as well as customer-facing platforms to improve reliability.

The company’s new investment plan allocated nearly $675 million of investments for adding new renewable assets to the generation portfolio. Evergy, through the new Integrated Resource Plan, aims to achieve net-zero emissions by 2045. To achieve the zero-emission target, the company plans to add 4,200 MW of renewables and retire more than 2,000 MW of fossil generation by 2032. It has already lowered emissions from its units by 51% by 2020 from 2005 levels.

Evergy has already started expanding the existing operations through partnerships and collaborations. The company has formed a joint venture with American Electric Power (AEP - Free Report) , named Transource Energy, which will be focused on a developing competitive transmission project named Transource Energy, LLC. Total project portfolio will be more than $600 million, with Evergy having a 13.5% interest in the venture. These projects make it well poised for sustainable and long-term growth in the transmission market.

Evergy has significant capital projects that are pending. Projects could get delayed due to permit delays, inadequate availability or increased cost of equipment and materials, which are beyond the control of the company, thereby increasing the cost of the projects and adversely impacting its profitability.

Electricity sales are seasonal and changing weather conditions play a pivotal role in overall performance of the company. Milder temperature in summer and winter months in its service territories adversely impact the demand for electricity and in turn profitability.

Shares of the company have outperformed the industry’s rally in the past six months. 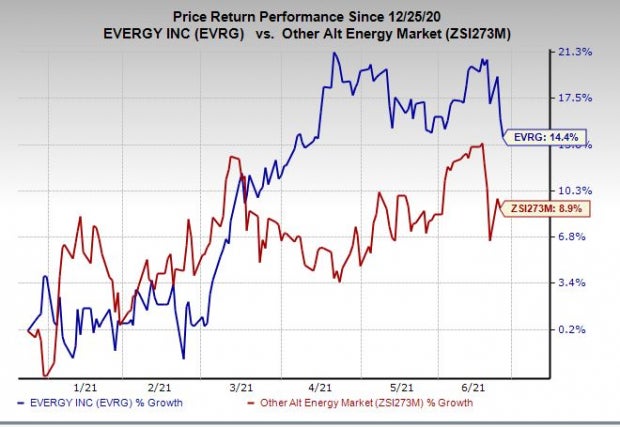 A couple of better-ranked stocks in the same industry include Covanta Holdings Corporation and Ameresco Inc. (AMRC - Free Report) , each having a Zacks Rank of 2.

The current ratio of Covanta Holdings and Ameresco is 1.08 and 1.38, respectively, which indicates that these companies have ample liquidity to meet debt obligations.

The Zacks Consensus Estimate for 2021 earnings of Covanta Holdings and Ameresco has moved up 320% and 6.7%, respectively, in the past 60 days.