Kinross Gold Corporation (KGC - Free Report) recently issued an update regarding the temporary suspension of milling operations at its Tasiast mine due to a fire that occurred on Jun 15.

Kinross stated that there were no injuries due to the fire. At Tasiast, mining activities have resumed, including stripping to access higher grade ore. The construction work on the Tasiast 24k expansion project has also restarted and the company is assessing opportunities to optimize the project, while keeping milling operations on hold.

Kinross is extracting resources to accelerate actions to reduce the SAG mill’s downtime and to review all potential strategies to stop the expected production deferral. Tasiast has insurance, which covers property damage as well as business interruption and commenced the claims process with its insurance carriers.

The company is in a strong financial position and committed toward evaluating options to further boost shareholders’ returns, despite the mishap at Tasiast.

Shares of Kinross have declined 4.9 % in the past year compared with 8.6% fall of the industry. 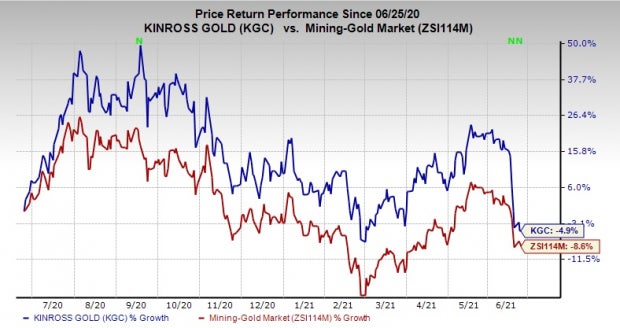 Nucor has a projected earnings growth rate of around 344.9% for the current year. The company’s shares have surged 131.7% in a year. It currently flaunts a Zacks Rank #1 (Strong Buy). You can see the complete list of today’s Zacks #1 Rank stocks here.

Olin has an expected earnings growth rate of around 506.7% for the current year. The company’s shares have skyrocketed 307.7% in the past year. It currently sports a Zacks Rank #1.

Cabot has an expected earnings growth rate of around 137.5% for the current fiscal. The company’s shares have surged 57.4% in the past year. It currently carries a Zacks Rank #1.